Here at StinkyLulu, we observe an annual tradition wherein we extol the many supporting actresses who captured our imaginations, our hearts, and our fancies in the cinematic year of 2009. Some are already serious contenders for this year's trophy; all deserve another look.

WELCOME
to
StinkyLulu's Tribute to
Actressing at the Edges in 2009


The 4th Annual
Supporting Actress Blogathon!
Scroll down for appreciations of all kinds of actressing.
36 performances honored in 37 posts from 28 blogs!
click back throughout the day for updates as entries arrive 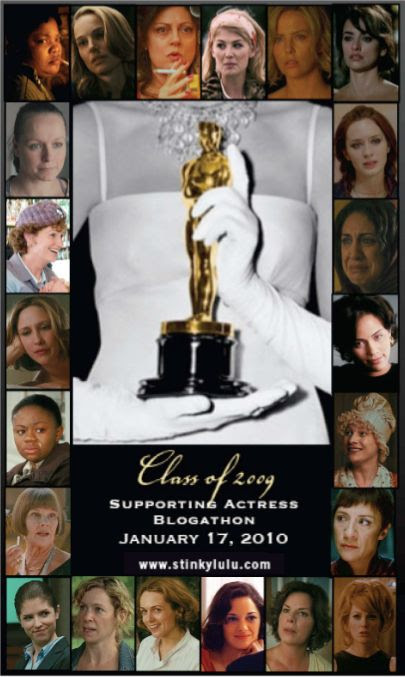 Kristin Chenoweth in Into Temptation (Encore Entertainment)
Patricia Clarkson in Whatever Works (Encore Entertainment)
Jennifer Cody in The Princess and the Frog (What Happened Today)
Marion Cotillard in Nine (My Territorial Bubble)
Marion Cotillard in Public Enemies (Alex in Movieland,
Monsieur Cinema)
Penelope Cruz in Nine (My Territorial Bubble)
Roxane Duran in White Ribbon (Alex in Movieland)
Anna Faris in Observe and Report (Reese Review)
Vera Farmiga in Up in the Air (Ben's Talking Pictures, Crumb by Crumb)
Heather Graham in The Hangover (Sasha Stone@Awards Daily)
Ginnifer Goodwin in He's Just Not That Into You (Ultimate Addict)
Carla Gugino in Watchmen (ShoNuff Lives)
Marcia Gay Hardin in Whip It (For Your Speculation)
Amber Heard in The Informers (Reese Review)
Mailes Kanapi in My Fake American Accent and Mangatyanan (RacsO Ledger)
Anna Kendrick in Up in the Air (Awkward Is What We Aim For,
oscarfan, And All That Film)
Rinko Kikuchi in The Brothers Bloom (Drilling Holes in the Wall)
Diane Kruger in Inglorious Basterds (Monsieur Cinema)
Mélanie Laurent in Inglorious Basterds (My Life Through Movies)
Carmen Machi in Los Abrazos Rotos/Broken Embraces
(Cine Latino en Nueva York)
Leslie Mann in 17 Again and Funny People (Victim of the Time)
Izabella Miko in Dark Streets (The Jaded Armchair Review)
Mo'Nique in Precious: Based on the Novel 'Push' by Sapphire
(Stale Popcorn)
Julianne Moore in A Single Man (Popcorn and Cigarettes)
Brittany Murphy in Across the Hall (Reese Review)
Bijou Phillips in Dark Streets (The Jaded Armchair Review)
Rosamund Pike in An Education (Encore Entertainment,
Strange Culture)
Meryl Streep in The Fantastic Mr. Fox (The Cargo Cult)
Kristin Scott Thomas in Easy Virtue (The Silver Screening Room)
Olivia Williams in An Education (And Your Little Blog Too,
Rants of a Diva)
The Women in In the Loop (Sasha Stone@Awards Daily)
The Women in The Private Lives of Pippa Lee (Encore Education)

Be sure to check back throughout the day for updates as they arrive.
And if you notice that someone's been left out of this tribute to The Class of 2009,
just whip up a profile on your own blog and send it on in!

Posted by StinkyLulu at 9:52 AM

I haven't watched the movie, but I can't believe none of the Whip It! girls are here.

What about Nine girls? Cruz, Dench, Cotillard, Hudson? What about Samantha Morton in The Messenger? And Anna Kendrick in Up in the Air? And Susan Sarandon and Rachel Weisz in The Lovely Bones? or Mariah Carey and Paula Patton in Precious? And Emma Thompson in An Education?

If someone writes a profile of any of those performances, I'll be happy to link to them...

Great job to all of the bloggers who participated. I read about half of the entries so far and it's just been a real fun way to spend a Sunday morning.

Though I'm still hoping someone does one on Sigourney Weaver's Avatar turn.

Hangelini, I'm definitely a huge fan of Cotillard's amazing work in Nine, but I guess she's deeming it Lead in her Oscar campaigning and, due to her phenomenal impact in the role, I can see it that way, too (hey, whatever she wants, and she does have TWO big solo musical numbers to support this non-supporting status notion). I still would love to see a SA writeup on her or any of the other lovely ladies of Nine.

So glad that someone did Rosamund Pike. I think she's been a bit lost in the press surrounding the lead. One of my faves.

It's great to see so many obscure or unexpected performances up here! And interesting that nobody's done some of the more obvious ones...though I guess they already are getting enough credit. :P

If you need a tribute to Anna Kendrick, I'm happy to provide one!

I wrote a profile of Anna Kendrick. Link it!

Shoot me an email containing the link, and I'll be happy to!

It's a pity no one did the girls form Nine, but nevertheless great contributions. Lovely work Stinky. Here's to 2010's Blogathon.

Thanks for hosting, this is always a favorite tradition of award season.

I hope you continue this tradition.

I would have never predicted a year ago that the cast of Nine would be so excluded from this list. That says a lot.

Thanks, RC. I totally agree. I wouldn't have expected it even two months ago (when I made the blogathon poster).

I generally place the actresses I perceive to be near shoo-ins for the nomination (and for blogathon attention) in the four corners of the blogathon poster. And, there, you'll see Penelope right up there. I also usually put strong dark horses "at the elbow" (where you see Vera Farmiga). So, while my prognostication worked well for the Golden Globes, I'm not at all sure I'll be right when the Oscar noms are announced...

@ Stinky - so true...also were's the Morton post & the Jane Lynch, it looks like a variety of the pictures in the poster have not been represented with post.

Now that I got my Internet connection back, I'm happy to say: Great blogathon! :) can't wait to get through all the performances!

Thanks again Stinkylulu for wonderful hosting and I hope you'll give us the pleasure of seeing a 2009 Supporting Actress Smackdown very soon :)

We all knew that the divine battleship that is Mo’Nique's performance in Precious: Based on the Novel ‘Push’ by Sapphire was going to take home a Golden Globe, and will likely snatch the Oscar too. Still, I love some of the other, very winning performances this year by the other girls. First, Anna Kendrick and Vera Farmiga (cancelling each other out) both knocked it out of the park in Up In The Air. Kendrick would get my vote as that dry little pill we all know at the office that is forced into being human. While Farmiga is warm, and by turns horrific as an adulterous cougar, she’s so unsympathetic I secretly prayed that her next amour would be Ted Bundy. Then there are the girls who were given star treatment in that unwatchable dollop of diarrhea - Nine, (sorry, flops don’t breed winners.) Best of all Penelope Cruz with ‘Call To The Vatican’ and Fergie is terrific performing ‘Be Italian,’ but Oscar worthy? Not! I actually loved Julianne Moore in A Single Man, for all of her character’s overly perfumed excess and gross misunderstanding of her gay amour. Bravo to Diane Kruger in Inglorious Basterds. Did anyone else feel the connection between this role and Joan Crawford in Above Suspicion? Maybe not, but she gave it the treatment and gets my respect. There are more ladies in line, but they will all have to just walk the red carpet and wait for another year, ‘cause if anyone else’s name but Mo’Nique is called in March, Miss Thing is gonna tear the Kodak to the ground with her carnivorous vagina. Bank on it.

I arrived a bit late to the party but I'd like it to be known that my choice would have been, like Alex, ROXANE DURAN in THE WHITE RIBBON.

She was the pick of the litter for me, and that is out of what is perhaps the best and most consistent ensemble cast of the entire decade.