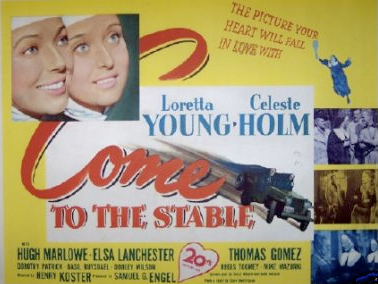 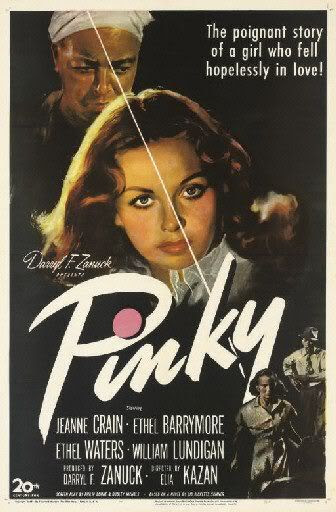 Oscar's Supporting Actresses for 1949 are: 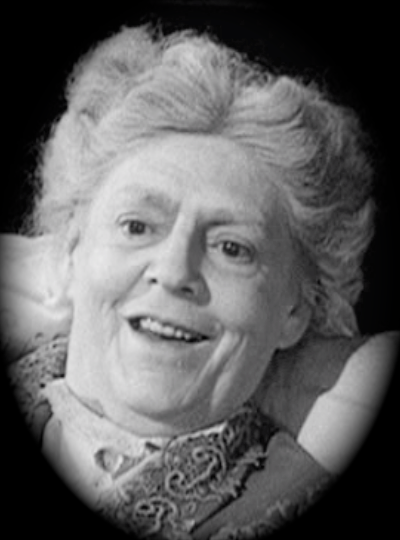 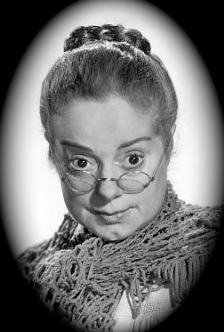 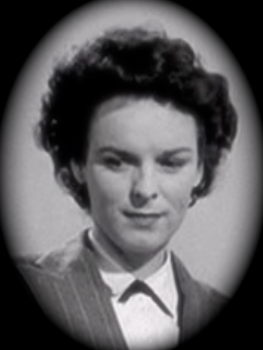 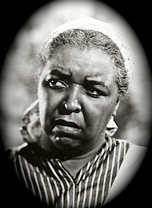 Hostessed of course by yours truly, StinkyLulu.
(If you have a blog, are able to re/screen this month's movies, and want to join the Smackdowning fun, please email StinkyLulu asap!)

Posted by StinkyLulu at 11:51 AM 3 comments: Links to this post

And the Smackdowners for the 12th Annual Academy Awards are...
AARON of Sarcasm with a Light Cream Sauce
ADAM WALDOWSKI of The Oscar Completist
BRAD of Criticlasm
DAME JAMES HENRY of Rants of a Diva
KEITH of In Which Our Hero
KEN of Canadian Ken
with
yours truly, STINKYLULU.

Olivia de Havilland in Gone With the Wind

So relentlessly good and decent is St. Melanie of Twelve Oaks that even de Havilland can't do much to make her interesting. There's no way for an actual personality to escape from beneath those countless layers of willful naivete and denial.
AARON

It may be the character's fault, but neither Melanie nor de Havilland ever do anything more than embody Scarlett's description of her as a goody-two-shoes. I was looking for more depth with this performance and didn't find any.
DAME JAMES HENRY

Played by any other actress, Melanie Wilkes would have gotten swallowed whole by Leigh’s Scarlett O’Hara and her fierce determination. But de Havilland’s trademark quiet strength is used to full effect; if it wasn’t for her, we might never understand what keeps these two bound to each other (whether they admit it or not).
KEN

Elsewhere, a de Havilland experience is sometimes like being force-fed on graciousness. But here, she’s perfect. Faced with the daunting challenge of making Melanie something beyond Goody Two-Shoes, she creates a rich, resolute, compassionate character – the wind beneath the picture’s wings.
STINKYLULU

In a role that would be hard to get wrong, de Havilland gets things right with impressive depths of complexity and humanity. Hers is admirable actressing made all the more interesting for how good de Havilland is at playing "good."
BRAD

de Havilland makes Melanie's goodness inviting and not cloying, which is no small feat. In a part that could've easily been a self-righteous goody goody, deHavilland shows us a woman who is trying to be the best self she can possibly be, and give everyone else that same credit, and somehow succeeds in having us never question why Scarlett would keep Melanie around.
ADAM

Early on, we're told Melanie's "too good to be true," but de Havilland knows better. She's a "cool liar," makes every sacrifice for the Cause, while remaining a "good Christian." Melanie is many things to many people, and only a brilliant actress could bring everything they have to such a complex role. Here is perhaps the best entry ever in the category. 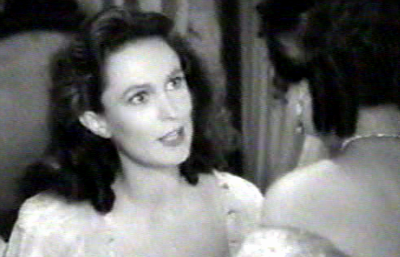 The picture never recovers from the comically grim tone of its opening. A Mel Brooks parody minus the punchlines. Fitzgerald’s undoubtedly accomplished – but has few opportunities here. Effectively fraught and desperate in her big scene with Olivier. Otherwise, just flotsam.
DAME JAMES HENRY

Fitzgerald is solid here and that scene where she’s getting slapped around by Merle Oberon is electric, but the nomination was more for her stage pedigree and the inexplicable popularity of Wuthering Heights than for this lifeless performance.
BRAD

Fitzgerald is serviceable in a role that is there mostly to show the cruelty of Heathcliff and Cathy's love. She's great in the one scene where she has to tell off Cathy, but it's an unsurprising boomerang of a role. I wasn't really interested in her trajectory, probably because everything was telegraphed long before it happened.
STINKYLULU

As everyone else in this ponderous epic of romantic destiny is hammering out stock performances, Fitzgerald’s intelligent work energizes the character’s naïve (and doomed) optimism in ways that prove refreshing. Yet, in the character’s devastating coda, Fitzgerald’s acuity lapses and her Isabella ends up more obtuse than tragic.
ADAM

As the neglected, strong-willed Isabella, Fitzgerald shines. Once she marries Heathcliff, she only has one scene to clue us into her miserable marriage. Unfortunately, her selfishness, bitterness, and desire to see Cathy dead feel false, and it's tragic to see Fitzgerald fail.
AARON

The liveliest performance in the film. Fitzgerald finds depth, humanity, and passion in an underwritten, rather pathetic character. It's a performance that adds fire and life to a sad movie with a foregone conclusion.
KEITH

A confident performance, and Isabella's transformation from naïve child to lively flirt to devastated wife is always convincing. Director William Wyler's choices shape our perception of Isabella to an unusual degree, but Fitzgerald's choices are always on target.


Hattie McDaniel in Gone With the Wind 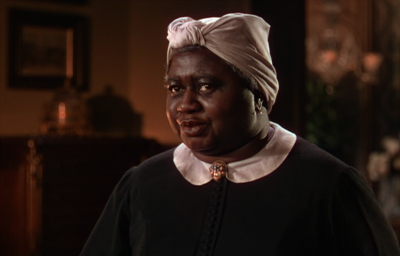 McDaniel offers an elemental, unguarded performance of this utterly stock character, using the character of Mammy to affirm the personhood of the enslaved domestic. Her nuanced integrity in the role remains fairly astonishing to behold.
AARON

This is a stock role McDaniel had played before and one she would play again. But her performance is always intriguing, and early on in the film, with no Rhett Butler to spar with Scarlett, this movie needs her authority, wit, and screen presence.
KEITH

The moral center of the movie. McDaniel never gives in to the weaker impulses of the script, which often wants Mammy to be a romanticized version of the Happy Slave; instead, she gives us a fully rounded woman, whose warmth and wisdom are undeniable.
BRAD

Every action she does is done out of care, and it's that grounding that keeps any humor honest, and adds extra depths of feeling. She's often a proxy for our thoughts, cutting through Scarlett's BS to what is good (and bad) about what she's doing. A deft performance in a role that could've been completely ridiculous.
KEN

A brilliant comedienne (I love those stream-of-consciousness rants). But with a vast emotional reservoir she could tap into at will. Whatever scope GWTW gives her to express both elements, she uses to maximum and memorable advantage. I rank her with the goddesses.
ADAM

As Rhett notes, Mammy commands respect. McDaniel reinvents the servant role, bringing added understanding to all her scenes ("He's her husband, ain't he?") and unparalleled emotional weight. The scene after Bonnie's accident is devastating and it's McDaniel who sells it. Gone with the Wind would be a different, lesser movie without her.
DAME JAMES HENRY

Mammy could have been just another “black servant” stereotype, but McDaniel seizes the opportunity and crafts a full characterization from the few tidbits she’s given. She may work for the white folks, but everyone knows who runs the show.

Edna May Oliver in Drums Along the Mohawk 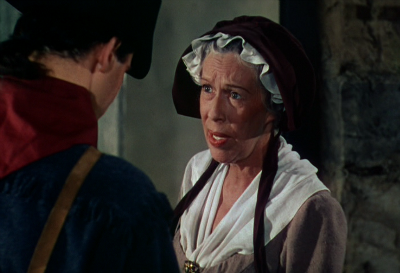 Oliver is fun, a welcome breath of no-nonsense fresh air in an otherwise earnest, racist, silly cinematic exercise. But the performance mostly consists of delivering the films best lines with an acid tone. And her death scene is truly nonsensical.
KEITH

Taken in isolation, I rather like Oliver's take on the Cranky Old Widder Lady stock figure. But her performance is so bleak and emotionally withdrawn that it seems to come from some other movie entirely; it certainly doesn't fit in this Ford/Fonda festival of patriotic thrills.
DAME JAMES HENRY

Edna May Oliver is the no nonsense, tough and impossibly hilarious type I want to be when I’m 60. Drums Along the Mohawk, however, is hardly the best showcase for her talents: she’s appropriately feisty and scandalous, but there’s not much “acting” going on.
ADAM

This sassy old broad role requires a physical presence and animation Oliver lacks. She's in on the jokes through her inflection, but anyone can read lines sardonically. It's a voice (and a face) made for radio, not screen acting.
STINKYLULU

As the film’s embodiment of the commonsense wisdom, wit and fortitude of the American frontier spirit, Oliver strikes an instrumental balance between goofiness and gravitas, contributing the best bits to a movie frequently teetering on the edge of silly.
BRAD

The movie is a mess of tone but, if anyone in the movie manages to find one, it's Oliver. She's brash. She's bold. She's frontiersy. She's certainly the only interesting thing in the movie but, in this case, that's not saying a lot.
KEN

One of many variations on Oliver’s specialty - the feisty and formidable old Mohican with a heart of gold. The bed-under-siege scene is certainly strange – more John Waters than John Ford. But the performance as a whole is a moderately rousing success. 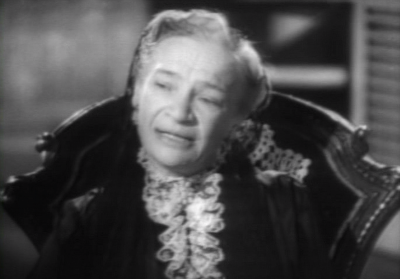 It's simply not noteworthy, or at least nowhere near the point of earning a nomination. Ouspenskaya has a sweet role, but one that could be equally satisfied by anyone carted in from the local nursing home. She must hold the record for most nominations for doing nothing.
DAME JAMES HENRY

Another two scene nomination for Ouspenskaya that doesn’t make the least bit of sense. Grand-mére Janou isn’t much of a character to begin with so Ouspenskaya’s attempts to bring something to the role are wasted. She’s warm and inviting but, in reality, her performance really could have been left on the editing floor and the film would have still functioned fine.
KEN

The boat-whistle moment works - but all the Stanislavsky technique in the world can’t convince me this little clenched fist of a woman is anything but a crabby old tyrant who’d slam you with her stick if you didn’t kow-tow (and probably if you did ).
KEITH

The role feels incomplete, somehow, and I kept expecting Grandmother Janou to return for one more scene. But in what little we do get of her, Ouspenskaya's warmth and charm are invaluable assets to the movie, which sags a bit after she leaves it.
AARON

Ouspenskaya is in a single sequence in this film, but the movie hinges on this sequence, and it is under Ouspenskaya's knowing eye that the titular love affair actually begins. Still, though the performance is sweet it's hardly groundbreaking.
STINKYLULU

Ouspenskaya's grand-mére Janou delivers a concentrated jolt of emotional honesty in a film constructed upon polite deceptions and demurrals. Her characterization, loaded with tiny details suggestive of rich subtext and a deep backstory, provides a clarifying counterpoint to the more emotionally untethered work of the two charismatic leads.
BRAD

A very capable, memorable performance in a role the entire plot hinges upon. I still remember her face falling as she says, "I hate ships’ whistles." Warm, inviting performance in an old school charmer of a film.

s
Oscar chose...
Hattie McDaniel
in Gone With the Wind 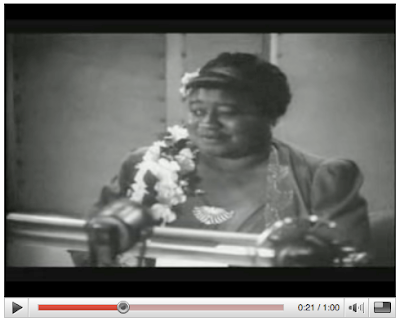 Click image to be routed to video of McDaniel's acceptance speech.

And the SMACKDOWN agrees... 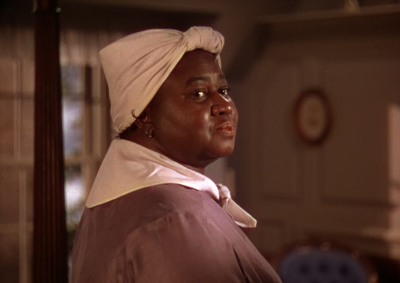 HATTIE McDANIEL is the
Best Supporting Actress of 1939!

BUT, lovely reader, what do YOU think?
Please share your thoughts in comments.
Posted by StinkyLulu at 8:53 AM 16 comments: Links to this post