It's baaack!
And I caaan' staaan' it! 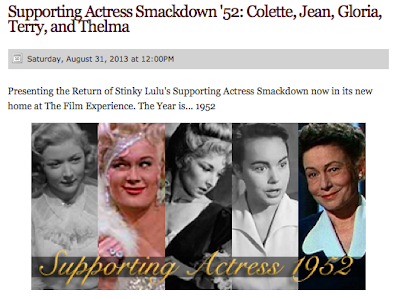 click image or here to get to all the fun
Posted by StinkyLulu at 4:25 PM No comments: Links to this post

1952’s nominated roles are definitely cut from Oscar’s favorite cloth: the hooker with a heart; the hale helpmeet; the full force of youth; the (briefly) suffering wife; and the shrewish “ex.” And the 1952 field definitely reminds us that, by the early 1950s, Supporting Actress had emerged as one of Oscar’s favored ways to anoint the newcomer/s with one hand, while taking care to honor the time-tested trouper/s with the other. As example, 1952's nominations honor not only breakout performances by “new stars” Jean Hagen and Terry Moore (not to mention the screen debut of Colette Marchand) but also familiar support work by previously favored nominees Gloria Grahame and Thelma Ritter. And, yes, Oscar’s habit of nodding to certain troupers also stirs the faint whiff that a Supporting Actress nomination might sometimes be an apology bouquet of sorts — Oscar’s way to say “please forgive my neglecting to nominate (or award) that other performance…but do accept this as a token of the Academy’s esteem.” (Might Grace Kelly’s 1953 nomination for Mogambo and Katy Jurado’s 1954 nomination for Broken Lance been made possible, at least in part, by Oscar’s neglect of their High Noon turns in 1952?) And in a field full of what I have called “coasters” (efficient supporting actressness buoyed by being part of a heavily nominated film), Jean Hagen’s nomination looms especially large as that “single nominated performance from an ignored-in-other-major-categories picture” (a particularly burdensome last bit of support not infrequently borne by Supporting Actress nominees).

All told, 1952 stands as nearly exemplary of the idiosyncrasies of the Best Supporting Actress category, and is thus perhaps the ideal one to revive the peculiar pleasures of the Supporting Actress Smackdown. And while I might wonder what this roster might have felt like if, say, High Noon’s Katy Jurado or Member of the Wedding’s Ethel Waters (or even Viva Zapata’s Mildred Dunnock) had “coastered” into the field, the Smackdown challenges us to look closely at the work of the women who were actually nominated in 1952, for it is in such “actressing at the edges” that the category’s true pleasures shine.


And don't miss Canadian Ken's brilliant (as always) survey of some of the women who just couldn't get Oscar interested in 1952.


Posted by StinkyLulu at 3:25 PM 2 comments: Links to this post