in the spirit of homage and tribute, to The Montgomery Clift Blogathon instigated by Nathaniel over at The Film Experience. Be sure to click through all the amazing posts accumulated there for much fascinating (and less ambiguous) appreciations of Montgomery Clift.

Thought #1: Monty Scares Me...
At the risk of being indelicate, 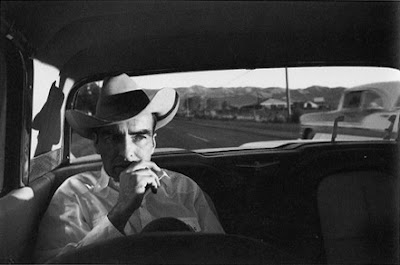 I've got a confession to make. I've always been more than a little unnerved by Montgomery Clift. I've never crushed, never admired. To be entirely frank, I've spent most of my Clift career trying to not look away, trying not to get completely freaked out by him. Of course, this may simply because I've gotten to know Clift backwards -- beginning toward the end of his filmography (with The Misfits at the Brown Film Society during Freshman Orientation) and never quite making it all the way to the beginning. And, truth be told, I think I've seen only five -- maybe six -- Clift flicks from front to back. Mostly because I avoid him. I find his presence so palpably haunting that it's hard for me to focus on the film when he's in it. (I mean, anyone who can upstage La Judy in the damage department has got something going on...) I keep waiting for Supporting Actress Sundays to drag me toward the earlier films. Perhaps he's less terrifyingly damaged there? But all the excerpts, all the clip shows, everything I've seen leads me to suspect that, through the lens of his life's later disasters, the sweet vulnerability of his earlier work carries a differently frightful depth of melancholy. But, yeah, Montgomery Clift sorta totally skeers me.

The only Montgomery Clift film 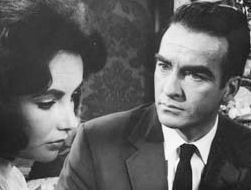 I've been known to get totally caught up in is the 1959 guignol delight, Suddenly Last Summer. There's just something delicious about the metatextual pleasures of this one: a brain damaged Clift threatening to lobotomize Elizabeth Taylor? Of course that's a movie I can watch again and again. I'm perhaps most captivated by Clift's inadvertent impact throughout the film. His arrival makes Hepburn's Mrs. Venable pre-menopausal again. His vaguely fixated gaze awakens a catatonic Liz. His mere presence in their midst makes a whole gaggle of Snake Pit-ettes go completely bonkers (and, in a loony bin, that's quite the accomplishment). Indeed, in this most hysterical film, Clift functions as catnip for crazyladys... and it's just wild to watch. (Notably, he does perform pretty much the same way in 1958's Lonelyhearts.) 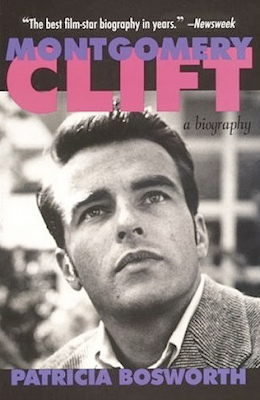 Sam Abel's essay in Passing Performances ("Staging Heterosexuality: Alfred Lunt and Lynn Fontanne's Design for Living"), my whole concept of Montgomery Clift has been overdetermined by the notion that he was the kind of person that people "adopted" emotionally. According to Patricia Bosworth's biography, the acting team of Alfred Lunt and Lynn Fontanne gave Monty a signed a picture of themselves: "From your real mother and father." Abel suggests that Lunt-Fontanne "took an interest in Clift specifically because of his homosexuality, trying to protect him from a hostile public" (Abel, 190). Even more perversely, this legend holds that Clift imitated Lunt's manner/affect as an unconscious gesture of homage. This notion -- that Clift would shapeshift in performative gratitude -- both frightens and saddens me.

Thought #4: Monty the lolly?
Looping back to Thought #1, 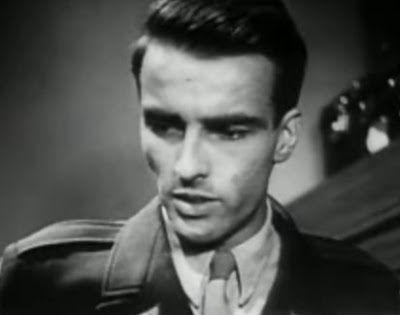 I sometimes wonder if the reason Monty scares me so is that he's one of the few Old Hollywood lollipop heads who seems to never hide the hugeness of his head. I get all anxious that his big noggin's agonna keep getting bigger until it snaps his little neck, or floats him away, or something else all freaky. (Toldja Monty Clift scared me.) 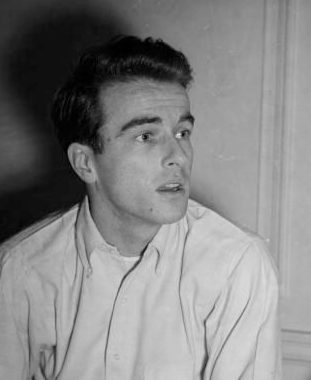 it seems only appropriate that I conclude with another confession: as much as Monty freaks me out, saddens me, and haunts me in ways I don't understand and cause me to avoid his movies -- somehow, honestly, I sorta totally like the guy. No reason, no rationale, just do. So, dear Monty -- many across the blogosphere adore and admire you, but you've made a specially freaky place for yourself in StinkyLulu's strange little heart. Blessings.

Posted by StinkyLulu at 8:39 PM

I ifnd it interesting how some performers' presence derives from their translucence, or that they are almost completely unable to hide what's really going on in themselves. I can't watch Jim Carrey at all without feeling sadness and anger beneath everything he does, so perhaps that's why I like him in Eternal Sunshine the most. Clift is the same way, and it makes his performances interesting and uncomfortable. I also think it's fascinating figuring in the strictness of the time in which he lived--especially the Willaims stuff and masculinity, but there are books on that, I'm sure.

"I mean, anyone who can upstage La Judy in the damage department has got something going on..."

I didn't know it was possible, but Monty is, at the very least, stiff competition.

Monty IS much less damaged in his earlier roles. The pre-crash Clift of The Search, Red River, The Heiress, etc. is a different actor and person from the shell of a man he later became (I once did a couple community theater shows with an out-of-control, self-pitying drug addict, and I could never look at Clift's work in The Misfits the same way afterwards, as his behavior in the film exactly mirrored that of the sad gentleman I'd worked with).

Clift was truly a brilliant performer before the storm set in, though, and you should definitely give his early career a good look.

stinky --perhaps you've hit the nail on the head as to why Monty has more trouble maintaining fame than his counterparts Dean and Brando. Monty deserves so much more credit than he gets (and Dean and Brando benefit from that vaccum of Monty praise) but maybe it's just because he's too open as a performer.

maybe his ache is too true for people to watch? as criticlasm suggests (and fyi: amen in regards to Jim Carrey)

What a touchingly poignant concept - to be "adopted by people emotionally."

Like moths to a flame, as it were, drawn to performers whose rawness touches us on a profound level - perhaps completes us on another.

SL - you did him & his hauntingness justice with your wonderful post.