Among the more difficult Supporting Actress performances to profile are those actresses who do what they do as members of an especially intricate ensemble. It's much simpler to track (and time) those performances where the supporting actress blows in, does her thing and leaves. Yet what drew me to this project in the first place were those actresses who were, as I like to say, doing most of their actressing from the edges of the scene. This week, we have a performance that does both: a handful of big attention clarifying sequences stitched together by intimate, ambient scenes in the background or at the edge of the camera's frame. What's more, it's the first Supporting Actress nomination (and win) for one of only two women to take home two Supporting Actress trophies in the category's 80+ year history. Of course, I'm talking about the career-transforming performance by... 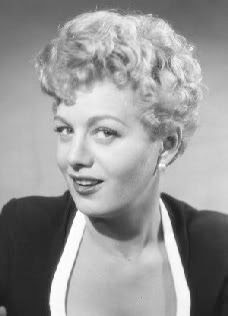 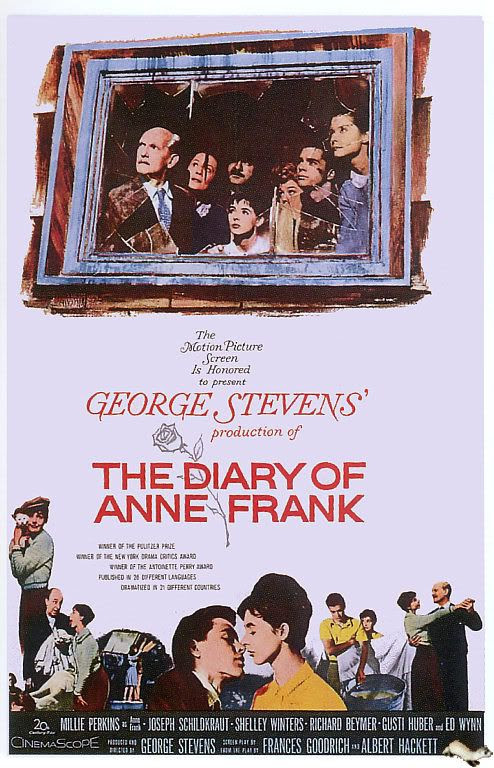 Shelley Winters plays Mrs. Petronella Van Daan, the privileged matron of the family that joins the Frank family as they all take refuge in an attic during the Nazi occupation of the Netherlands.

Mrs. Van Daan is a privileged, cultured woman, who dotes on her son Peter (Richard Beymer in a surprisingly affecting performance) and who bickers ferociously with her husband Hans (Lou Jacobi also very good).

Where the Franks are prone to self-sacrifice, high principles and good grades, the Van Daans are a little less perfect, with Mr. Van Daan a creature of appetite, Mrs. Van Daan prone to vain fixations, and Peter a skilled daydreamer and thus middling student.

The forced intimacy of hiding impels these two very different clans to forge an almost familial relationship and the contrast between the two ratchets the narrative tension at nearly every turn. Although Peter seems first smitten with the elder Frank daughter Margot (a subtly effective Diane Baker), Winters's Mrs. Van Daan is the first to notice the chemistry stirred between her son and the younger Frank girl Anne (Millie Perkins, unremarkably adequate in the role, neither bad nor good and in a totally Hollywood kind of way).

The film (like the play upon which it is based) uses the historical character of Anne Frank -- age thirteen when the action of the narrative begins, approaching sixteen as it ends -- to craft a coming of age story. The film marks Anne's journey, undertaken within this cramped attic, as she blossoms from a precocious child into an inspiring young woman. For the first half of the story, Perkins's Anne is the catalyst for the characters around her, her childlike actions revealing each of the other character's deepest vulnerabilities.

For Winters's Mrs. Van Daan, Anne elicits a heightened awareness of her long lost girlhood -- both of being a much-desired young woman and of being the daughter of a man who only bought her "the finest things." Shelley Winters deftly marks how Anne's questions evoke both Mrs. Van Daan's most joyful and most painful emotions and, when the child carelessly spills milk on the woman's treasured fur coat, we see how Anne takes the blame for the difficult feelings her impetuous actions (as well as her mere presence) tend to instigate in the adults around her.

In this scene, as well as in several comparable "emotional set-pieces" that punctuate this claustrophobic narrative, Winters scores Mrs. Van Daan's abrupt transitions with clarity, twirling like a debutante in one moment and shrieking like a madwoman only a minute or so later.

Yet it's not in the character's showier moments that Winters's performance is most impressive; rather, it's in the many wordless, ambient moments that Shelley Winters really anchors both the role and the film as a whole.

Where Mrs. Frank (the extraordinary Gusti Huber) selflessly reins in her feelings most of the time, Shelley Winters's Mrs. Van Daan is guided by no such sense of emotional duty. Only the imperative of survival compels Mrs. Van Daan to repress her desire to rant, to wail, to shriek in terror and need. Throughout the performance, Shelley Winters both conveys and contains the vastness of Mrs. Van Daan's private, terrorized hysteria in ways big and small, loud and quiet, rational and irrational.

I also see a kind of actressing "bravery" going on in Shelley Winters's work in the role of Mrs. Van Daan, one that might be somewhat difficult to discern today if only because it's become so conventional (both in terms of what Oscar-bait performances now "look" like and also in the retrospective context of Winters's subsequent career).

Winters's performance here is remarkable for its lack of vanity -- she often looks just awful -- causing me to think of hers as among the first trophy-snagging performances by "de-glammed" actresses. (Remember that, throughout the 1950s, Shelley Winters was among Hollywood's most well-regarded sexpots and that Elizabeth Taylor's Martha was still a few years off. Remember too that the only two members of the Anne Frank ensemble to receive acting nominations were Winters and Ed Wynn, the project's most recognizable performers each playing way out of what was then their usual "type.")

Winters does not flinch from the characters shrillness, shallowness or selfishishness. Nor does she dodge Petronella Van Daan's petty, reactive and defensive pride. In so doing, though, Winters also lays the necessary foundation for the final emotional explosion to rock the tiny attic.

When Mr. Van Daan is caught stealing bread in the night, Mrs. Frank demands that the Van Daans leave immediately. Winters's work in this sequence is great. She begins by registering Mrs. Van Daan's most unguarded moment of sadness, a weary despair at what her life has become.

In the moments that follow, Winters's Mrs. Van Daan pleads for her friend's sympathy, before shamelessly begging for forgiveness, as she's pulled by her husband's pride up the stairs to pack.

Winters's work here opens the ways in which Mrs. Van Daan, neither an especially strong or proactive person, expresses her instinct to survive and protect those she loves. In such moments, I see the respect Winters has for her character, a regard that possibly exceeds that scripted by the piece itself (which almost cynically exploits "ignoble" characters like Mrs. Van Daan to stir drama within an essentially static situtation).

As the final tableau dissolves in smoke, Winters's performance permits me to recall Mrs. Van Daan (and, by extension, Mrs. August Van Pels upon whom the character was very loosely based) not only as a character but as a human person who met an incomprehensible fate. Such is Shelley Winters's accomplishment in the role.

Shelley Winters takes this most showy and device-laden character and, avoiding camp, makes Mrs. Van Daan indelibly, memorably human. It's not as easy as it looks and, in The Diary of Anne Frank, Shelley Winters makes everything feel incredibly -- and terrifyingly -- real.
Posted by StinkyLulu at 3:58 PM

What a wonderful write-up of an unfairly maligned actress and performance. Thanks, StinkyLulu!

it's the only one of the 5 nominated performances I haven't seen yet. I don't know why, but I'm keeping it for last, probably because of the nature of the film.

I know I'm either gonna be blown away by her performance or not at all.

Right now I'm re-watching Pillow Talk. It makes me sad thinking of excellent genres that cannot be handled anymore: like the 50s romantic comedy. or the screwball.

I recently spent a lot of time with this film (and this performance) and this piece hits the nail right on the head.

It's interesting to note that Winters fought hard to get this role. She had worked with director George Stevens before, on A Place in the Sun (1951), and he had guided her to the first of her four Oscar nominations, in her first de-glammed performance. (I believe if she had been nominated in supporting instead of lead, she might have given Kim Hunter a run for her money).

not to say Ed Wynn was bad, but I am shocked that he got a nom while Joseph Schildkraut didn't. But yes, Winters is devastating in this.