Donna Reed in From Here To Eternity (1953) - Supporting Actress Sundays 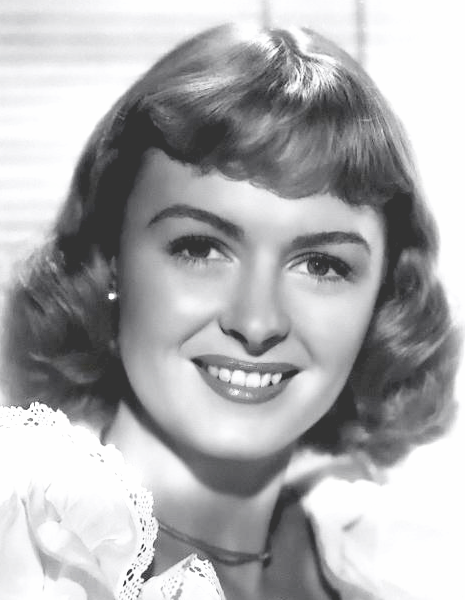 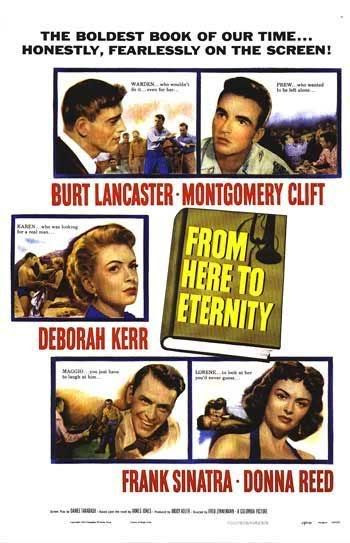 Donna Reed plays Alma, an ambitious young dame who's working in Hawaii at a not-quite seedy dance hall in the days, weeks, and months just prior to the attack on Pearl Harbor in December 1941. 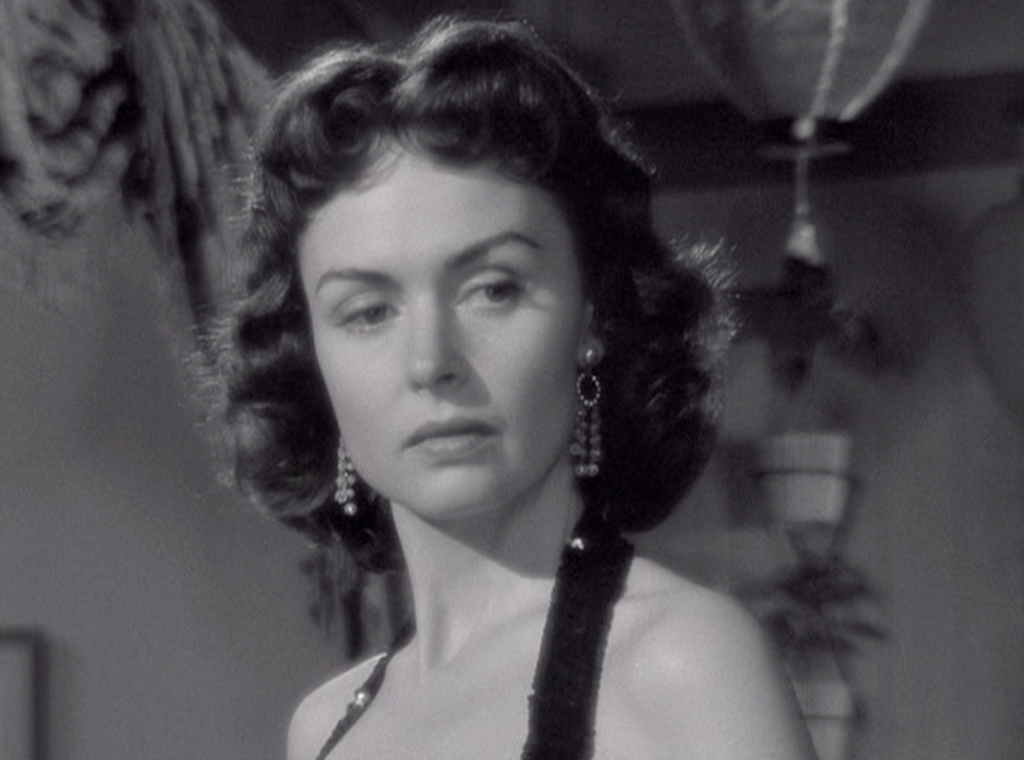 Reed's Alma works under the name "Lorene" (the proprietress thought it sounded "French"), although her colleagues call her "Princess." Reed's character catches the eye of Prew (Montgomery Clift), who seems to fall in something with her at first sight. For her part, Alma first treats this handsome newcomer as just another client ("Mrs. Kipfer pays us to be nice to all the boys"), watching him with a combination of curiosity, amusement and contempt. 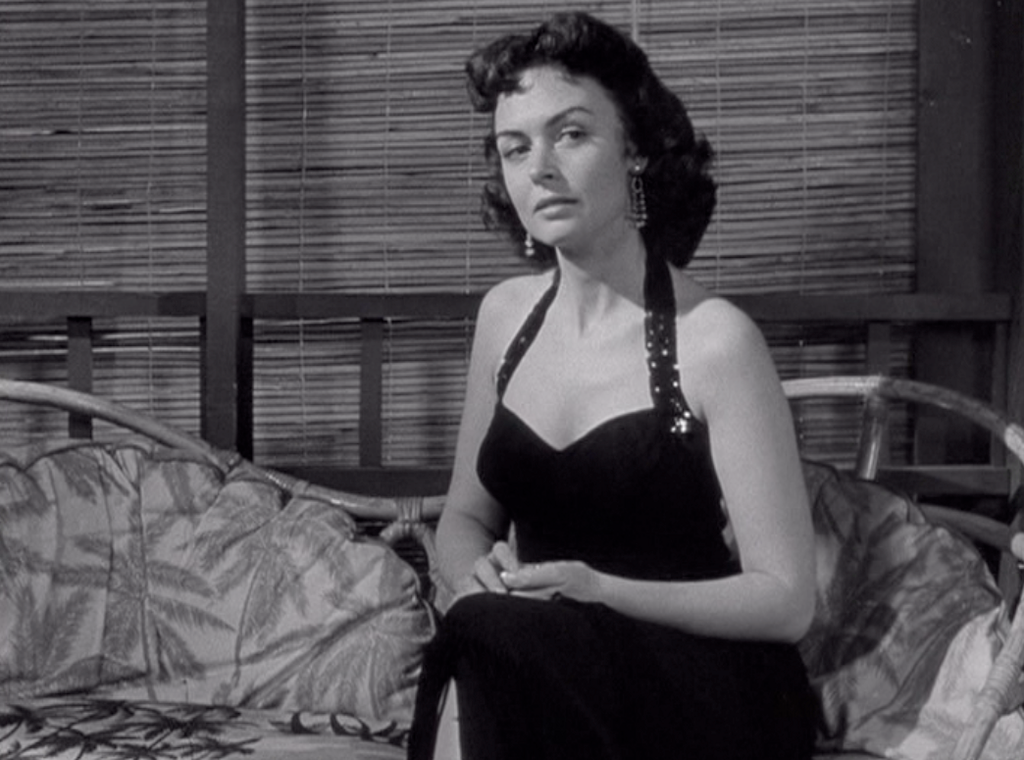 Soon, Prew's guileless tenacity in pursuit of her seems to warm something within Reed's Alma, and she invites Prew to join her in the establishment's "special" parlor, where they laugh and talk and begin to "know" each other. (This being early 1950s Hollywood, the question of whether or not Reed's "Lorene" is an actual "pro" remains a coyly crafted mystery. Filmmaker Fred Zinneman, however, seems to enjoy toying with the studio censors, first allowing the word "French" to hang in the air somewhat salaciously in one scene and, in another, showing Clift relaxing in recline as Reed's head rises into frame from what at first seems to be the area of his lower abdomen. The posture's potentially lewd implications are quickly erased when it becomes clear that Clift's been cradling Reed in the crook of his arm.) 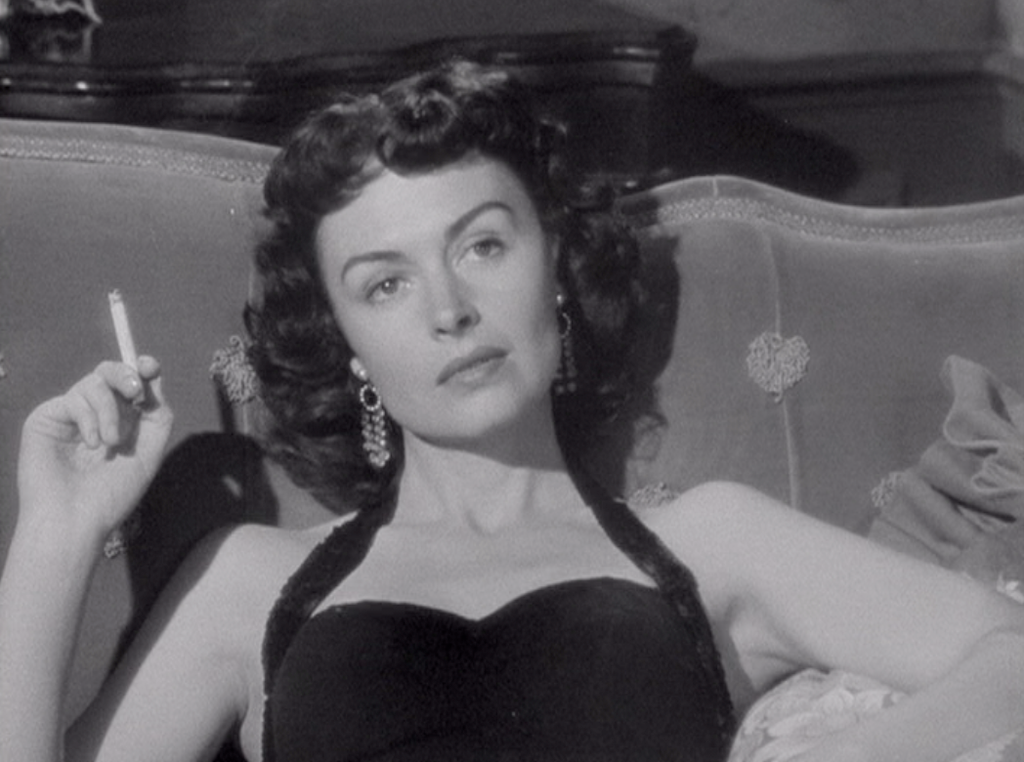 In Mrs. Kipfer's special parlor, Reed's Alma begins to appreciate Prew's integrity, his history, what makes him different -- and the two begin to fall into a kind of love, the kind that seems only to make sense in war movies. Indeed, Prew's and Alma's story -- rebellious soldier falls in love with tough tart -- comprises one of the three (comparably clichéd) storylines that drive From Here To Eternity, a war-story melodrama rippling with surprising social commentary. (In a nut, the film depicts the social rituals and hierarchies of military culture as irrational, old-fashioned, elitist, and ultimately indirectly responsible for the U.S. military's unpreparedness for Japanese attack on December 7, 1941.) 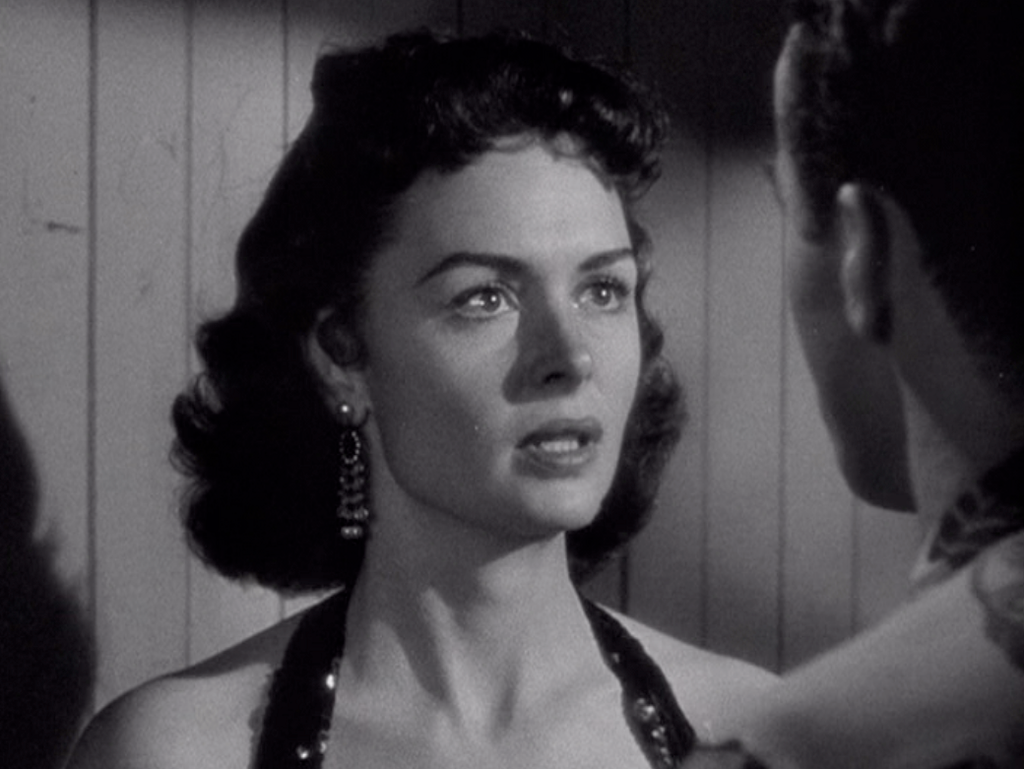 Reed maneuvers the cliché's of the role with savvy precision. She's neither a victim of her circumstances, nor is she a hard-hearted hellion. Rather, she's always already a bit of both. Reed presents Alma as an ambitious woman, determined to become "proper" and adept at mercenary tactics to do so. She tried marrying into propriety, which didn't work, and now she's set on earning enough to buy her own way into respectability. And while she loves Prew, in a way, his defiant humility -- Clift's character artfully dodges acclaim and prestige whenever and however he can, despite his extraordinary gifts -- forcefully reminds Alma that she wants to climb the very social ladder that Prew's intent on defying. 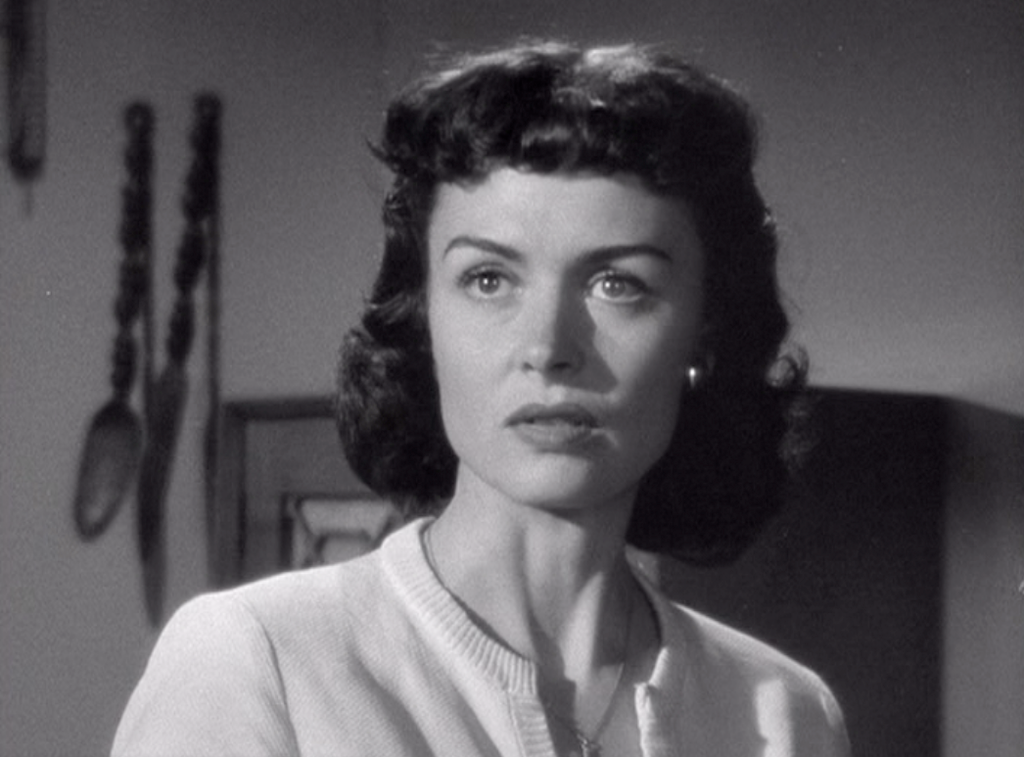 Reed's accomplishment in this role derives from her ability to maintain the heat on Alma's mercenary intentions, even as she deploys her formidable charisma and intelligence to making the character likable and (dubiously) respectable. I find it nearly impossible not to just "like" Donna Reed, and so find it impressive how appropriately Reed underscores that Alma's got some -- ahem -- "issues" that predispose her to a scary sort of obsessiveness and rage. But Reed also demonstrates how much Alma genuinely likes Prew, how she sees in him a kindred spirit comparably abused by arbitrary structures of privilege and power. 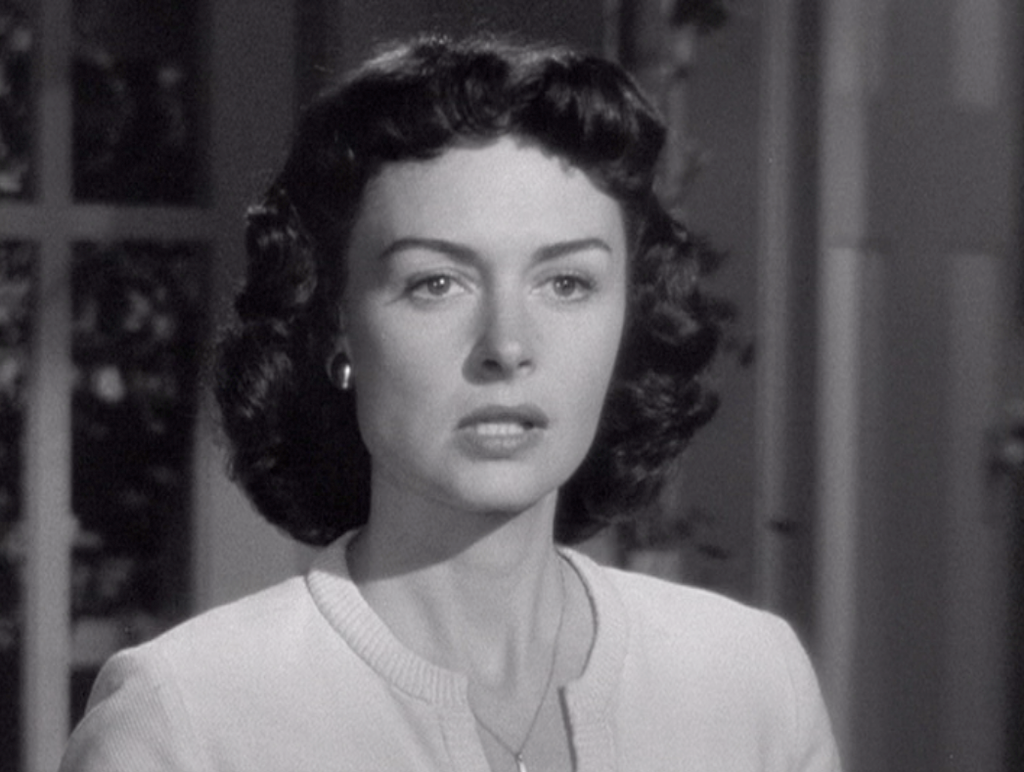 The limits of their compatibility, however, is revealed on the morning of the attack, when Prew ("I'm a soldier") insists on returning to base in spite of Alma's desperate attempts to remind him of the myriad ways in which the Army has done him wrong. Prew leaves and Alma is -- once again -- alone. 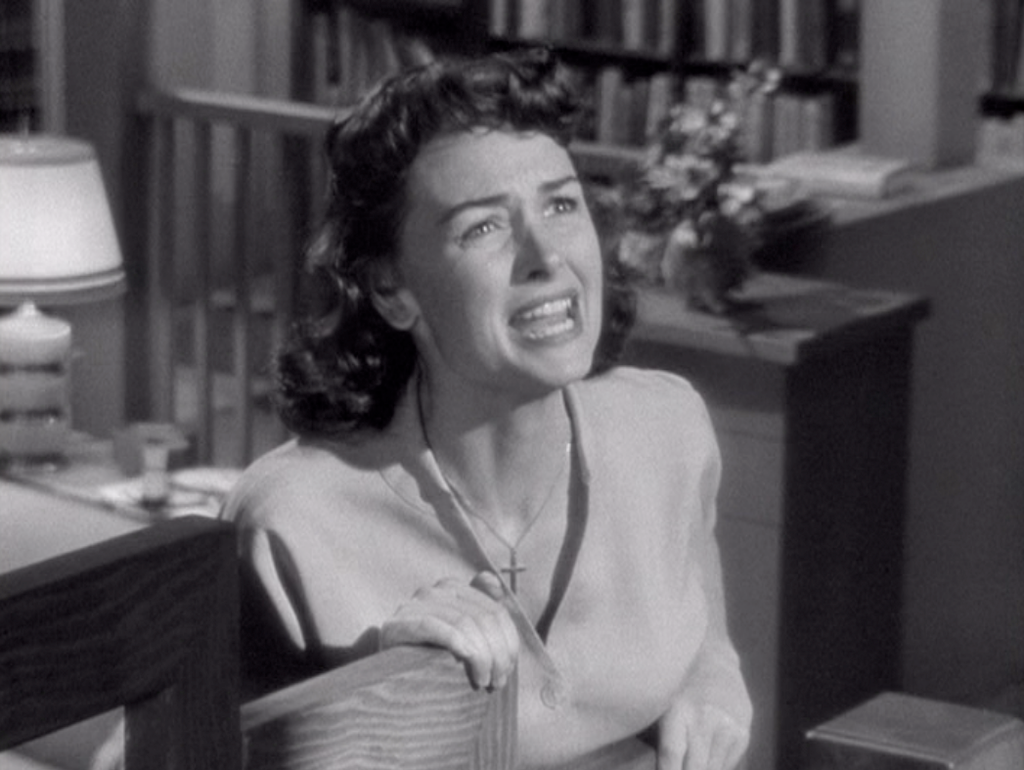 Reed is effective and intelligent in the role, drawing an empathetic portrait of a woman who is making mostly self-serving choices. Alma is a possibly despicable character, and Reed maintains her own likability without compromising her character's complexity. It's adept, necessary work -- essential to the film's emotional effectiveness. But Reed probably won her trophy for that final scene in which she, along with Deborah Kerr (not nearly as effective as Reed in a comparably complex role of the adulterous officer's wife), is carried from the shore of Hawaii for presumed safety on the mainland. In this haunting coda, Reed displays the character's darkest sides as Alma uses Kerr's character as a test-audience for her new plan. 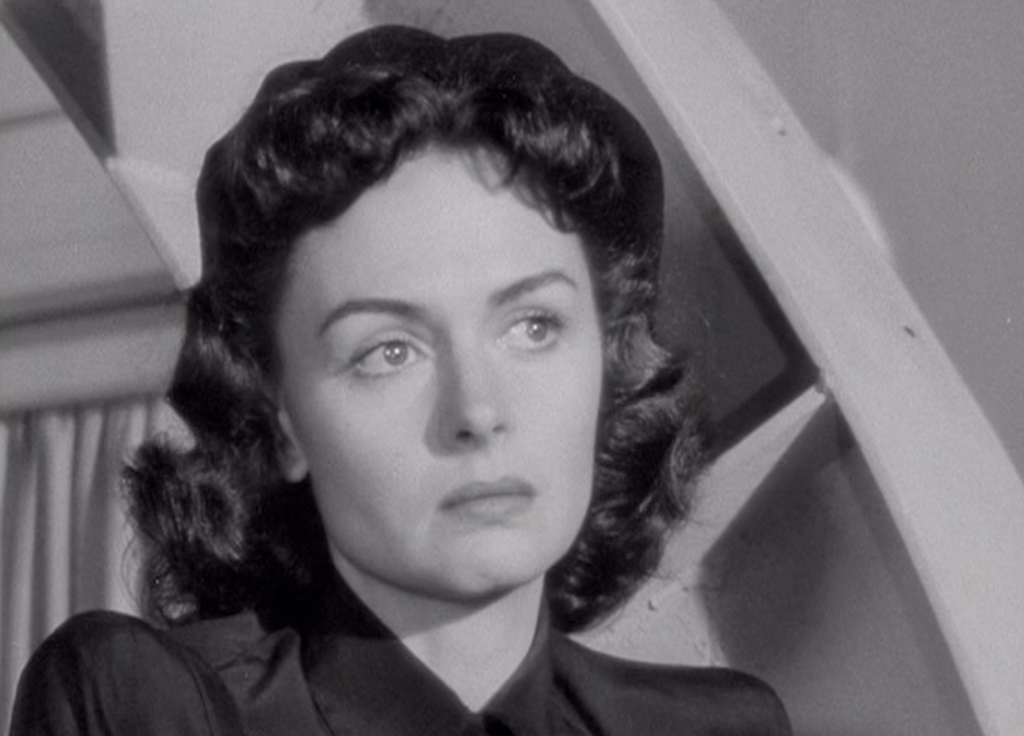 In this brilliant coda, Reed reveals Alma's mercenary core with haunting efficiency. As she spins the yarn of her dead fiancé -- killed, she says, in battle on the morning of December 7 -- Reed's Alma cannily surveys Kerr's reaction and we come to realize that Alma's hit upon a new plan in her single-minded pursuit for propriety. She needn't marry for it. Nor must she earn it on her own. Caressing Prew's only truly personal item in her palm, it becomes clear that Alma's finally found her ticket to propriety: a dead "fiancé", killed in the first attack of a new war. Reed's work in this scene is simple, stark, and effective -- and it's certainly what snagged Donna Reed her own permanent ticket to Hollywood "propriety": 1953's Best Supporting Actress Oscar.

So great that supporting actress sundays have begun, I think I'm not the only one who was hungry for yet another great analysis of actressing at the edges.

I don't even see why this performance was nominated. Alma is a user and a loser, but Reed is just too "nice" to illuminate the darker sides of her personality unless the script makes it impossible not to do so - as in her scarily misjudged "propriety" speech.

I actually hated this film - the male leads were very good but all in all it's a pretty turgid exercise.

These Supporting Actress Sundays are always an event for me.

Everyone was such a ghost in From Here to Eternity (except Lancaster; turning him into a ghost would be quite a feat). Too many "names" diluted the enterprise. As much as I love Deborah Kerr, her arc felt so tacked on, like the movie needed to include the older set. Still, she made the exercise of cigarette smoking seem "appealing."

I agree about Thelma. I enjoyed this year more than I thought I would, but Grace Kelly and Geraldine Page's nominations seem kind of weird to me. They were both good, but they most likely belonged in the lead category. Both Hondo and Mogambo, while enjoyable (esp. the latter) still seemed like films in their embryo form, without a clearly developed story arc. From Here to Eternity was painful, and Torch Song was a bore, although I liked Marjorie Rambeau's witty cameo. Torch Song earns points for the most unintentionally hilarious closing line in the history of movies.

All of this month's movies are basically new to me so I'm looking forward to them all.

That said, I am a little surprised at the passionate disdain for Reed... Her thread in the movie, while not brilliant in and of itself, was certainly the only mildly interesting aspect of the film. I think I think Reed is a basically interesting actress, working with intelligence within genres that presume stupidity. (However, I do think she and Clift are basically miscast and would have done better in the Kerr/Lancaster roles.)

Of course, with that description of Alma as "a user and a loser" makes me want to cast Jerri Blank in the role. Which would be verrrrrrry amusing, I must say.

This is one of my favorite of your write-ups. and outstanding kick-off to season 3.

I really like this performance and its so much more complex and I should add BELIEVEABLE than it would have been in lesser hands.

but then, I like the film too and Clift is brilliant as well

Clift miscast? Hmmm. Fred Zinnemann reportedly told Harry Cohn he wouldn't make the film without Clift as Prewitt, and I think the director was right. Few other actors could bring this outsider to life with such beautiful shadings. Clift delves pretty far into the role- Brando's the only other viable choice I can think of who possibly could have made as big an impact as Prewitt. Lancaster's casting is also great, and he "owns" his role in a manner similar to what Clift accomplishes as Prewitt.

Zinnemann wanted Julie Harris for Alma, but Cohn insisted on Reed. I would love to have seen what Harris could have brought to the role, but I think Reed steps up to her biggest challenge as an actress in fine fashion, and she really connects with Clift (I always thought she sealed the Oscar with her "What did the army ever do for you?" goodbye to Prewitt).

My feeling about the casting of both Clift and Reed is that, to me, they're a little genteel for the roles they play here. (Also, I've gone on record elsewhere with my not "getting" Clift.)

Yay! One of my favourite blog events combined with a film that I enjoy a lot but nobody else seems to like as much as I do and a performance I'm rather fond of.

I prefer Deborah Kerr in this movie, but Donna Reed does incredibly well with her role. I love your comment that Reed 'works with intelligence' because that's what I find is so true. It's something that's hard to discern but once you see it, it's there. Another actress that displays this same kind of intelligence is Julianne Moore, who is arguably more talented.

This was a very good analysis - had me trying to remember back to when I last saw this film - humbly realizing I hadn't paid enough attention to Reed. You are right about the odd casting - but I love it when actors/tresses are cast against type. So much more interesting & it makes them work so much harder to realize their characters, leading to potentially richer performances.