Forgive my tardiness as StinkyLulu offers the following "5 Stinky Thoughts" as my contribution to the monthly FILM CLUB instigated by Final Girl. 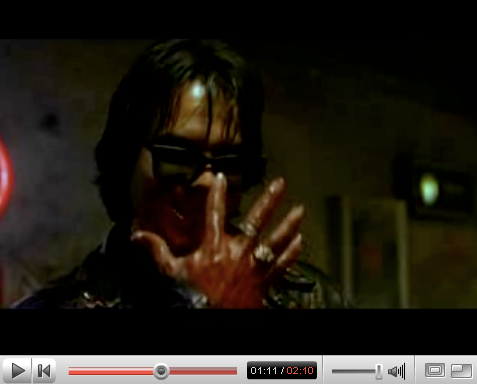 Thought #1: Near Missing Near Dark.
Not sure how it happened but, 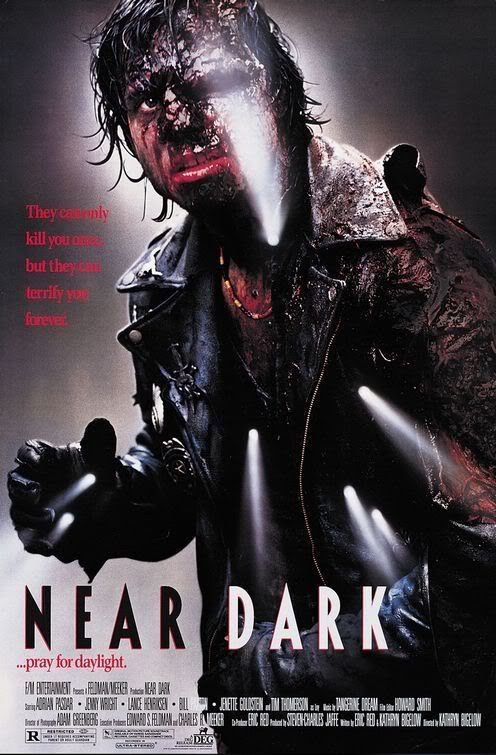 somehow, despite a near miss or two, I had totally missed Near Dark -- 'til now. So, for Film Club, I arrived to Kathryn Bigelow's film as a complete neophyte, knowing little about it beyond two superficial details. One: people seem to treasure this indie horror flick. Two: it features what is possibly Bill Paxton's most revered performance. But I truly expected Near Dark to be a smartish splatter-tacular featuring hip vampires as outsider anti-heroes. I also anticipated there to be a "bad blood" riff, a nightmare -- circa 1987 -- of the deadly consequences of exchanging blood products. I certainly did not expect a genre-defying existential romance featuring a cowboy with pronounced vampiric tendencies and a heightened ethical sense. Indeed, Near Dark defied my every expectation at nearly every turn. Thanks, Final Girl, for the prompt to screen this smart, scary, sensitive tale -- 'tis an unusually haunting (and hilarious) film.

Thought #2: The Family That Feeds Together. 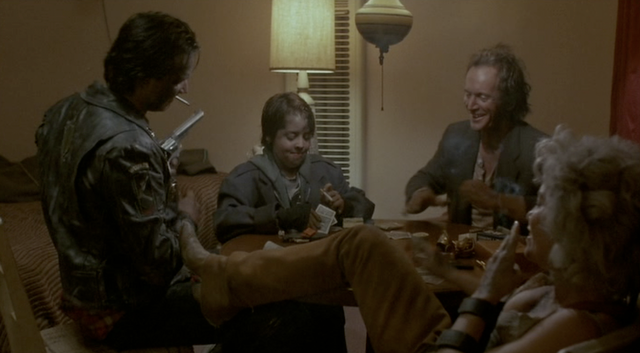 Vampire stories are so well suited to AIDS allegories -- the deadly desires, the survivor's guilt, the blood products -- that I tend to casually disregard the possibilities of vampires as addicts. (I think my preferred monsters for addiction narratives are probably werewolves.) Yet, even as Near Dark savvily dodges any AIDS implications in this mid1980s riff on the vampire story, it subtly explores the dimension of another cultural crisis circa 1987: active addiction as a family disease. Perhaps it's hard to recall now but it's worth noting that 'twas not until crack began ravaging certain communities in the mid- to later 1980s that the notion of a family of addicts started circulating in the popular consciousness. (Previous notions of addiction as a family disease had a single addict threatening the health and security of the nuclear family.) The idea of relatives "turning" each other onto a shared drug of choice was comparatively new in 1987, a narrative trope reflecting something that happened banally with alcohol from forever, stealthily with heroin in the 1970s, with crack more rapidly and more visibly in the 1980s, and most extensively with meth in the 1990s and the 2000s. But this intergenerational vision of a mother, pre-teen and grandfather all using the same drug at the same time became a particular, new vision of horror in this period and Near Dark explicates it with an evocative ambiguity that remains compelling.

Thought #3: Who Knew Bill Paxton Could Be So F'n Brilliant? 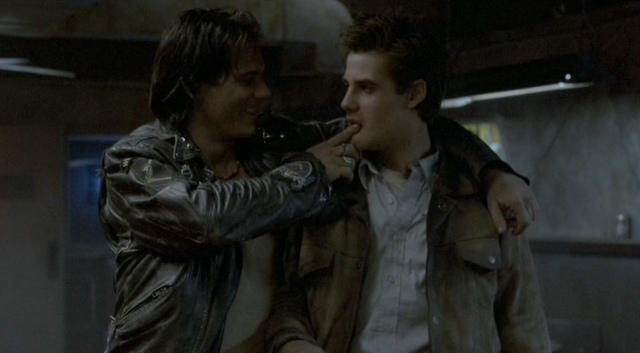 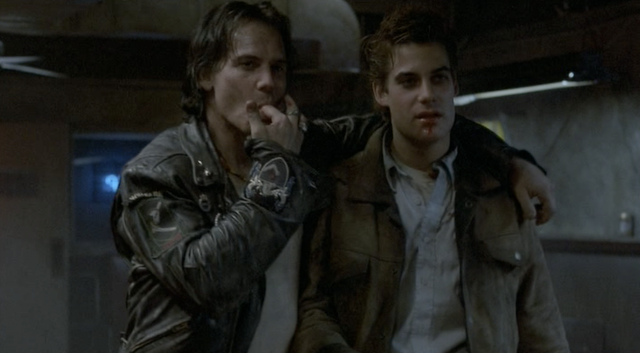 As the big bad Severen, Bill Paxton delivers what is certainly one of his most memorable and accomplished performances. Paxton approaches Severen as a person who just happens to be a supernatural monster, and this simple choice enriches the film in delightful and terrifying ways, while also elevating the character's stock horror bits with poignant hilarity. Paxton's Severen is all unfettered id (albeit the id of a mucho macho man who happens to drink blood with plans to live forever). But rather than tapping into Severen's rage or angst or arrogance, Paxton taps into the character's glee, recalibrating Severen as a creature who wants to party all the time, every night, for all eternity -- and beware to any who kill his buzz. This is, I suspect, what makes the scene in the biker bar so thrilling. Paxton could have played it all predatory and terrorizing, but instead he plays it as an incredibly tasteless prank, a "let's play with our food before we eat it" kind of stunt. Further, Paxton plays the scene as if he's taking his little brother to a cathouse. For Severen it becomes an opportunity to have a good time showing off a little while also initiating his young ward into this new mode of manhood. The result is a strangely charged scene of homosocial preening and masculine autoerotics. Yes, it's a gruesome terrifying scene, but one made curiously and complexly thrilling by Paxton's excellent work. 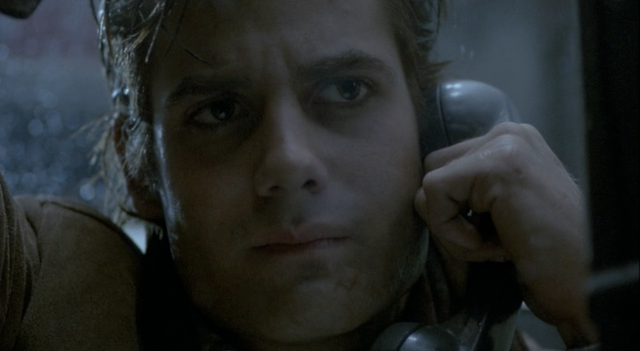 Among actors of his generation, Adrian Pasdar must have one of the most distinctive heads. The pronounced brow, the sleepily deep set eyes, the supple lips, the cartoonish jaw -- Pasdar is both immediately recognizable yet curiously generic, both sooo 1987 and timelessly ideal for morally ambiguous characters. Here, Pasdar's tasked with playing a zen romantic hero, a sensitive new age family guy capable of kicking ass but who's defined by his adamant refusal to become a killer. Pasdar possesses a dewy doofiness that permits the actor to participate effectively in what emerges as one of the film's most interesting subversions (the reversal of the date rape scenario). Pasdar maintains our empathy even when, all at once, he's both the aggressor and the victim. In just such a way, Pasdar conveys all the character's essential paradoxes: he's the horndog with a heart of gold; he's the kid who's neither especially smart nor particularly dim but who nonetheless somehow figures his own way out of an eternal conundrum; and, most essentially, he's the tender-hearted vampire. The role draws well upon Adrian Pasdar's peculiar gifts and the actor's actually fairly excellent in the part (and pretty dreamy besides).

Thought #5: Detox for the Undead. 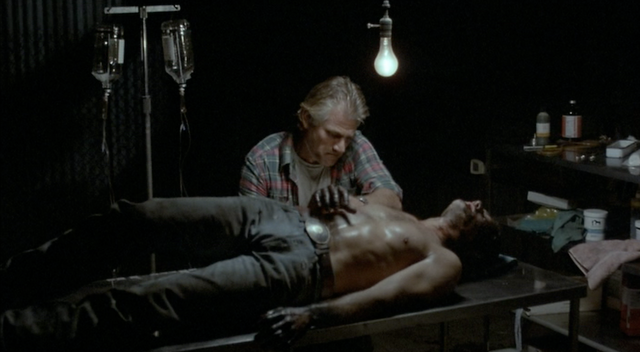 One of the things that remains fascinating about this film to me is that, aside from its use of unspecified vampirism as an overt metaphor for an unspecified addiction, Near Dark also stands as a recovery narrative: a narrative depicting one addict's ability to "recover" from his addiction and (most especially) spread the possibility of such healing to others similarly afflicted. The film's climactic transfusion sequences are essentially detox scenes and, when Caleb brings the hope of a cure to his beloved Mae, it's like an AA story -- one addict helping another to find a new way to a new life without their drug of choice. There're no rehabs or 12steps in Near Dark but the film does stand out as a fascinating riff on the cinematic genre of addiction/rehab narratives, whether intentionally or not, with Caleb standing as proof that there is a way out of the (near) darkness. 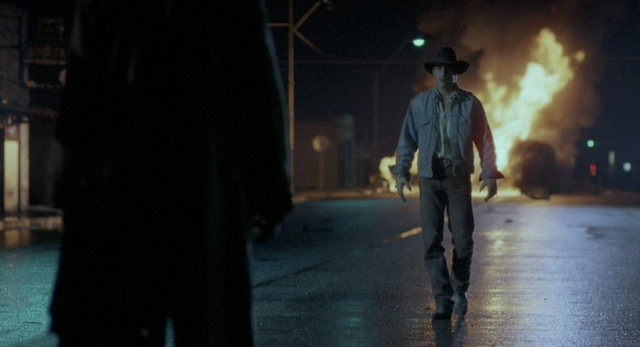 So, lovely reader, do you have your own Near Dark experiences?

Posted by StinkyLulu at 1:59 AM

i feel dumb after reading that... i've seen near dark countless times and the addict/recovery metaphor never occurred to me.

Great insights about one of my favorite vamp flicks!

Bill Paxton is so wonderful in this. I can't listen to The Cramps' fabulous version of Fever now without thinking of him. I believe he was channeling Lux Interior a little bit for his role.

i'm glad you finally saw this. It's one of those rare horror films that I'm always recommending to people and I loved your insights into it.

That bar massacre is one of the most memorable scenes of that entire decade of cinema I think. I rarely screen the film and I remember its horror and humor and shock so well.

I don't know if you remember but JA wrote a fun piece on this film for my vampire blog-a-thon too which I suggest looking at again now that you've seen it.

I love this movie! In addition to giving us some of Bill Paxton's best-ever work (before he got crammed into bland nice-guy roles in mainstream Hollywood product), it's worth nothing that this was also the movie that put Lance Henriksen on the map.

That'd be the intoxicating Jenette Goldstein, buck; reading up on this film the other day made me long for more her in the world. Also, she's the abusive redneck step-mom in Terminator 2 who gets Robert Patrick's arm-spike through her head as she drinks a carton of milk.

she's even more baddass than that -- she's the one whose arm spike impales her husband through the head while he's drinking the milk.

Wow - I actually want to see this now. Not my kind of film - but your wonderful write up is fascinating.

Crap, you're right Corey; I got it turned around. BAD ASS!