Some Supporting Actress wins stand out because -- while not necessarily a "first" -- they're one of the "few." One of the few times a performer of color takes the trophy home. One of the few times a performance from a genre picture -- murder mystery, fantasy, romantic comedy (...or a swirl of all three) -- gets the prize. One of the few times a broadly comic turn, loaded with slapstick no less, snags Oscar. Such "few" performances get easily, almost immediately, dismissed by Oscarphiles -- as novelties, as tokens, as apologies -- as a lapse of some kind in Oscar's judgment. Of course, one of the things that such Oscar commentary commonsense tends, ironically, not to consider is the level of accomplishment of these "few" performances, which -- almost invariably -- are much more than they might seem on first, dismissive glance. Case in point? 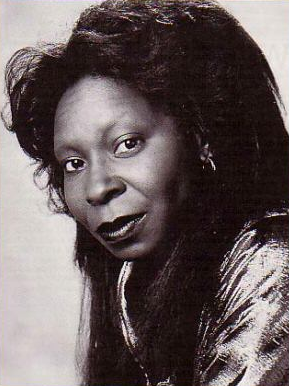 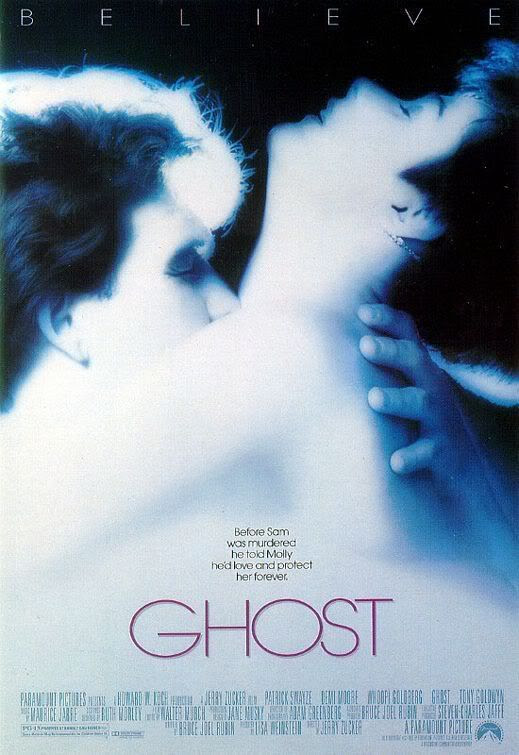 ...Whoopi Goldberg in Ghost (1990).
approximately 30 minutes and 43 seconds
19 scenes
roughly 24% of film's total running time
Whoopi Goldberg plays Oda Mae Brown, a storefront psychic who boasts of a family history with "the gift" while hiding a personal history as a con artist. When the film introduces Goldberg's Oda Mae, she's got an efficient operation going, using sideshow tricks to hustle $20bills from superstitious widows as she feigns communication with their dearly departed. 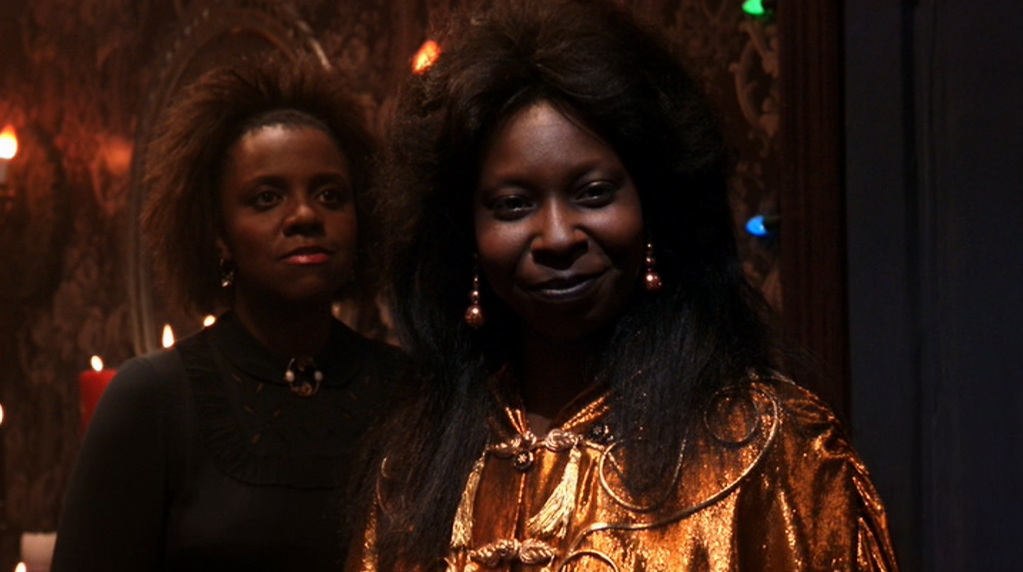 No one's more surprised, then, than Oda Mae when she hears the voice of Sam (Patrick Swayze), an actual dead person who's struggling to figure out the rules of his afterlife. Sam taunts and torments Oda Mae, nagging and harassing her, until she finally agrees to convey a message to Sam's beloved, Molly (Demi Moore in an effective -- and deservedly iconic -- performance of a paper-thin role as Sam's grief-stunned love). 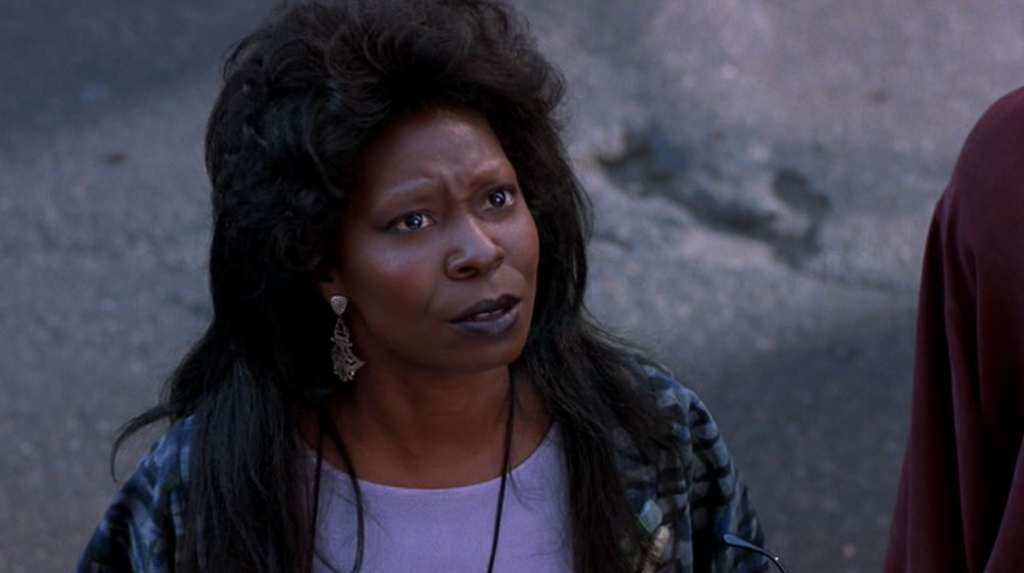 Such is the film's simple premise: Sam needs Oda Mae's help so that he can complete his journey to the other side, a situation that neither spirit nor medium particularly appreciates. This tension sets the stage for the series of surprisingly slapstick episodes (with Goldberg's Oda Mae at the center) that focus the main action of the film. 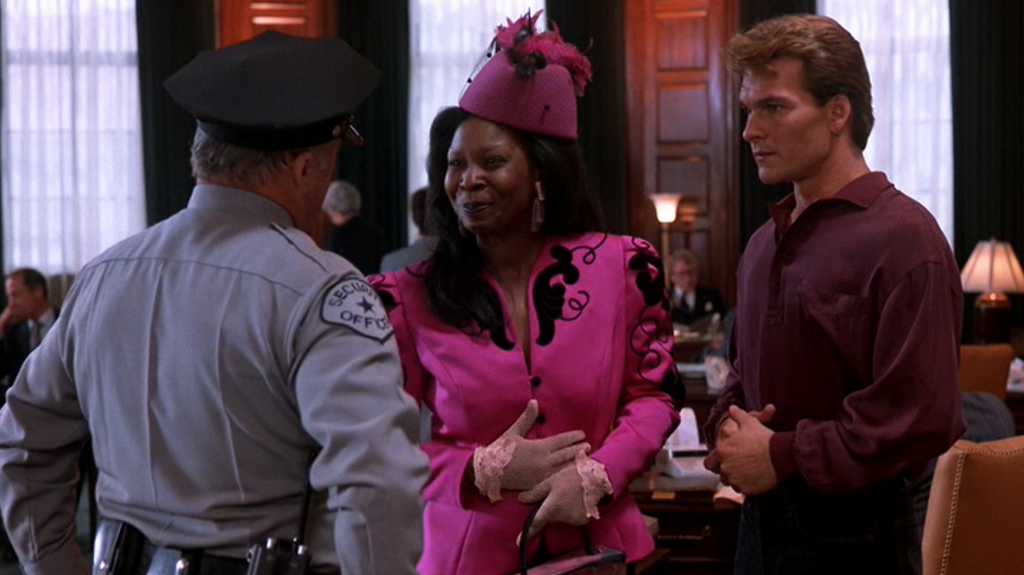 Slapstick, most simply, describes a form of broad physical comedy in which the exaggerated spectacle of a character's physical pain becomes the source of great humor. Slapstick generally requires pristine precision in execution and timing, necessary to create the effect both that the pain was real and that the performer was not actually hurt in the process. And while there are no banana peels, loose floorboards, revolving doors, or kicks to the fanny to announce "This Is Slapstick!", Ghost's director Jerry Zucker (also of Airplane and Naked Gun fame) stages each of Goldberg's episodes along a consistent coordinating principle: for different reasons, and in different ways, each of Sam's arrivals causes Oda Mae incredible distress, which she feels -- and manifests -- physically. 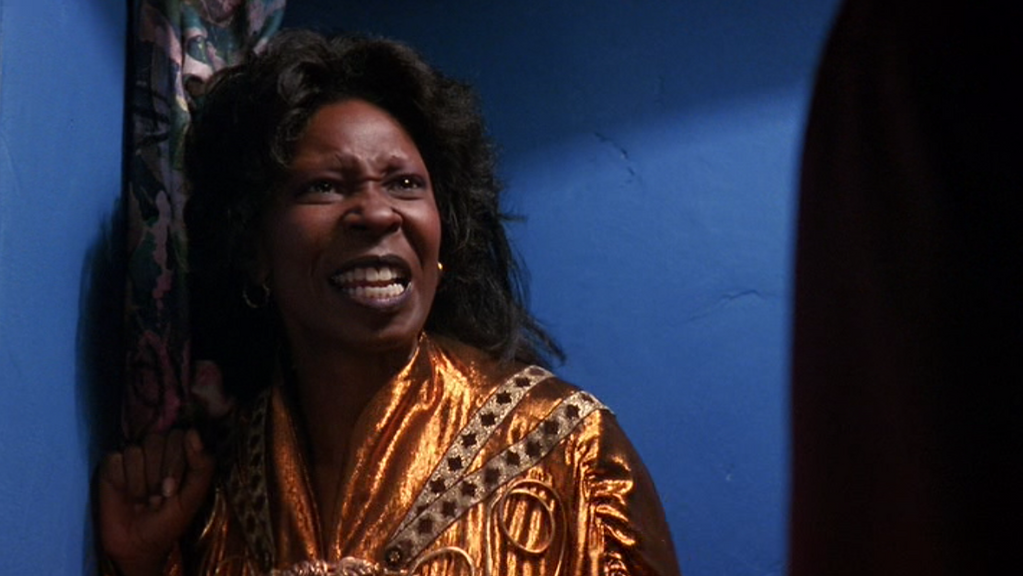 At first, Sam's like a buzzing gnat -- a presence that won't stop annoying Oda Mae. Before long he's put her in contact with all kinds of folks, living and dead, who are just complicating her life with their demands and their guns. Then, Sam makes Oda Mae really uncomfortable by first demanding that she run the biggest scam of her life and then insisting that she give the money away (click images below to enlarge for detail). 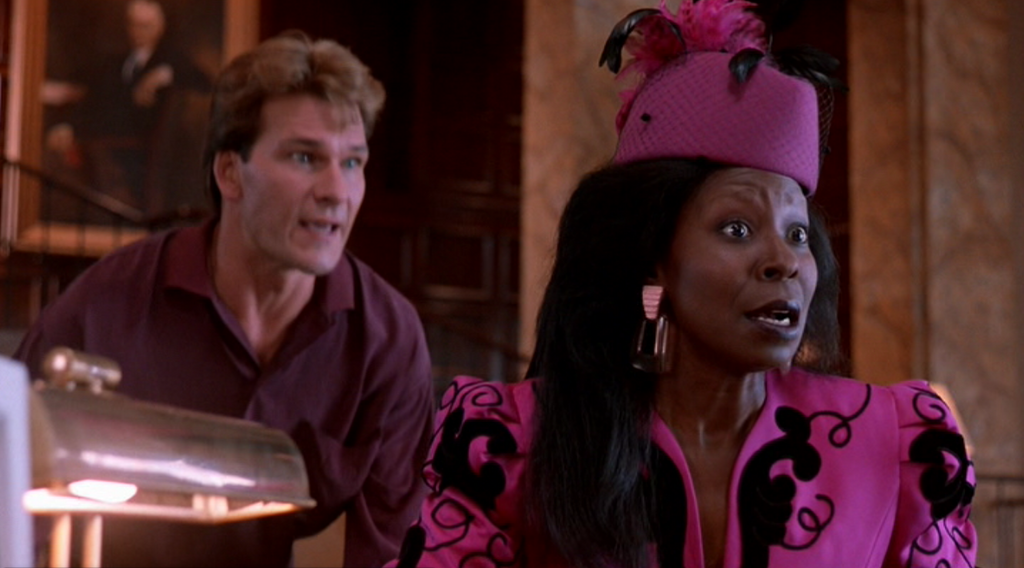 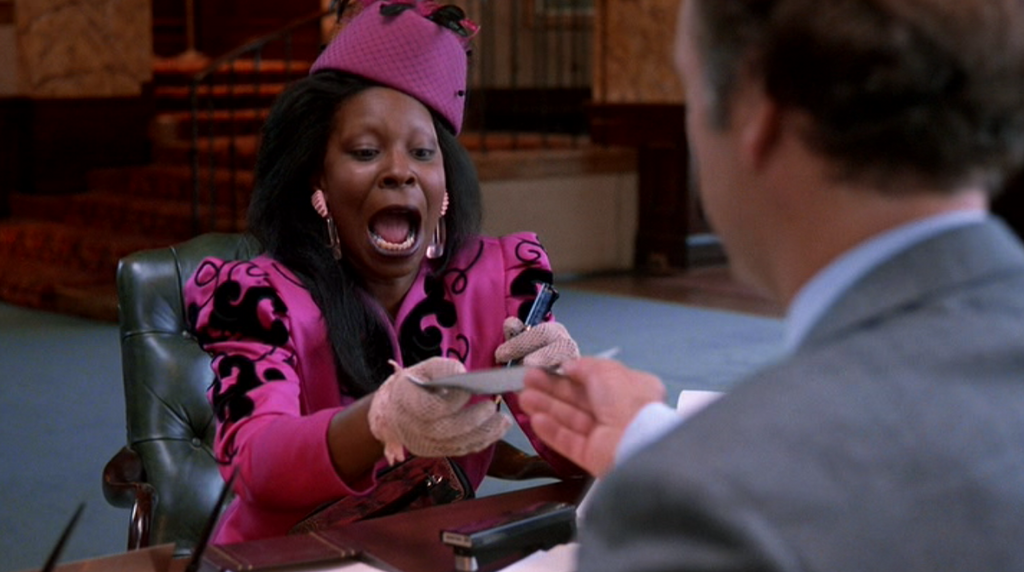 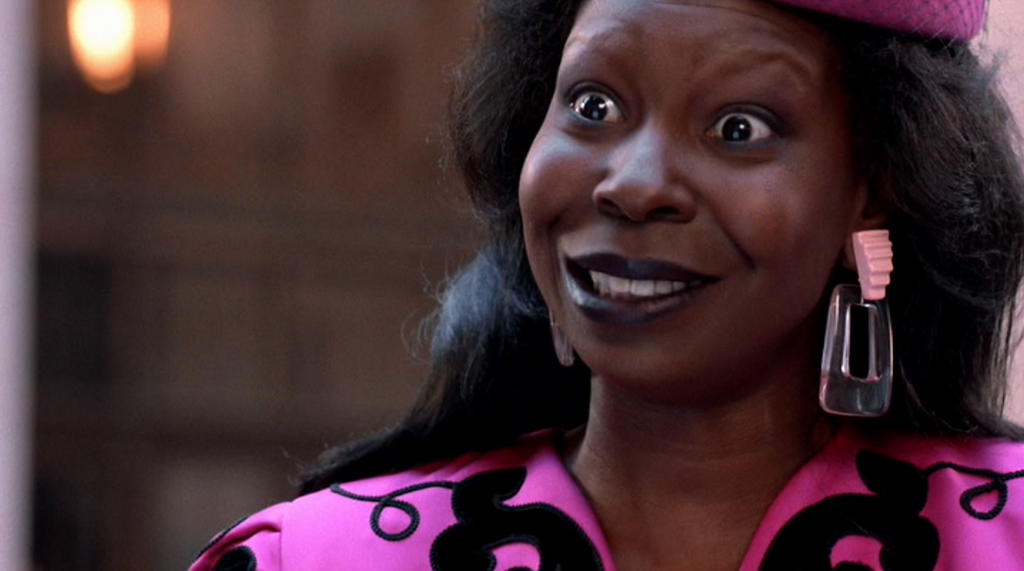 Perhaps the most effective demonstration of how Goldberg and Zucker use the pleasures of slapstick to advance both Ghost's plot and Oda Mae's character can be seen in the film's two surrogation scenes, in which a spirit takes over Oda Mae's body to communicate with the living. 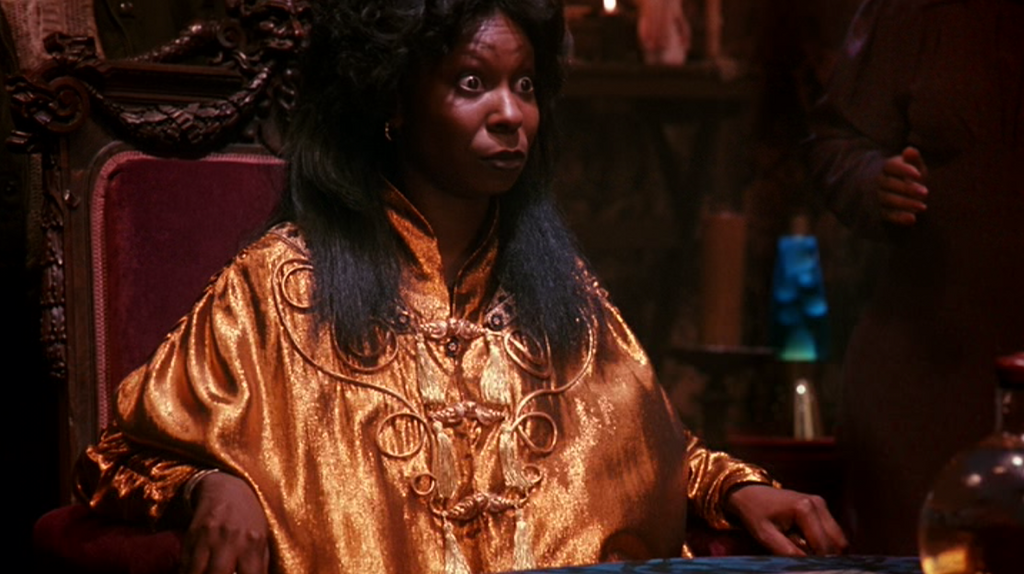 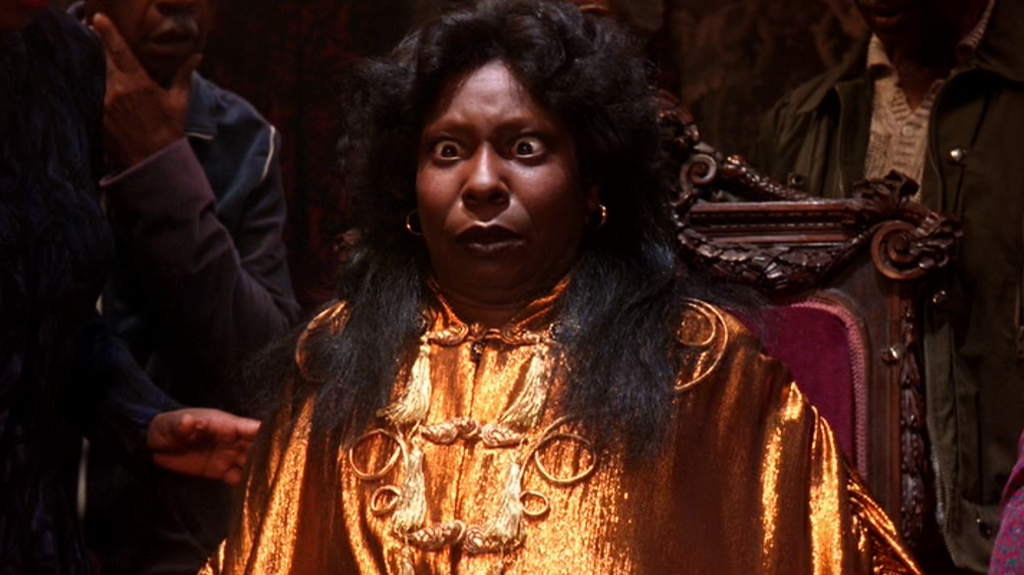 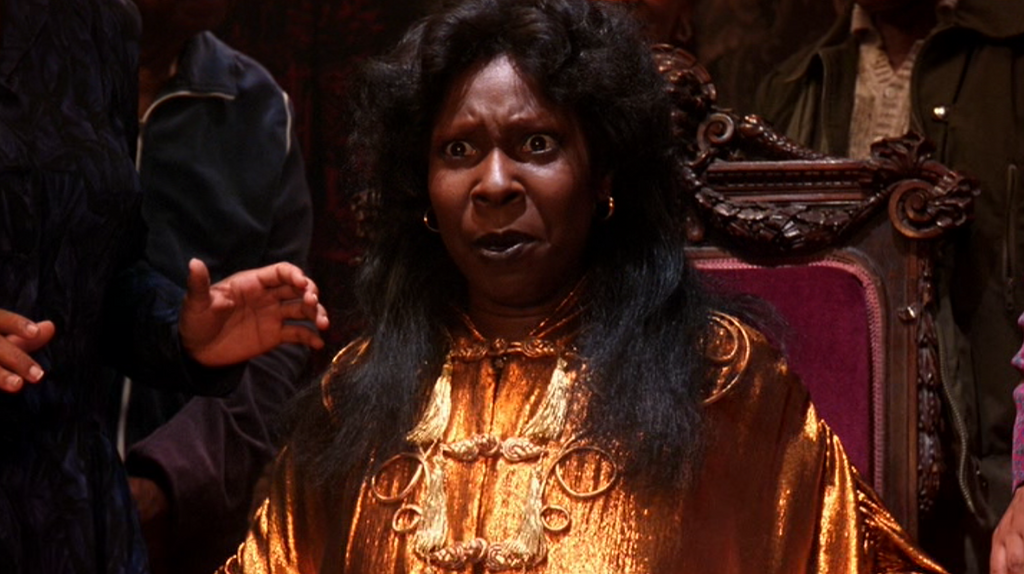 In the first scene (click images above to enlarge for detail), a wandering spirit jumps uninvited into Oda Mae's body. Goldberg manifests this process physically, rising a little from her chair, making funny faces like she's just swallowed something, and then expelling the spirit from her body. The core action of this scene is the comic spectacle of Oda Mae's distress. Goldberg plays each gesture of the spirit surrogation for hilarity, while emphatically conveying the unpleasantness of the experience. Of course, this first surrogation scene is a set-up for Ghost's most legendary scene to come later in the film, wherein Goldberg's Oda Mae (somewhat) willingly submits to another surrogation so that Sam and Molly can have one last kiss. 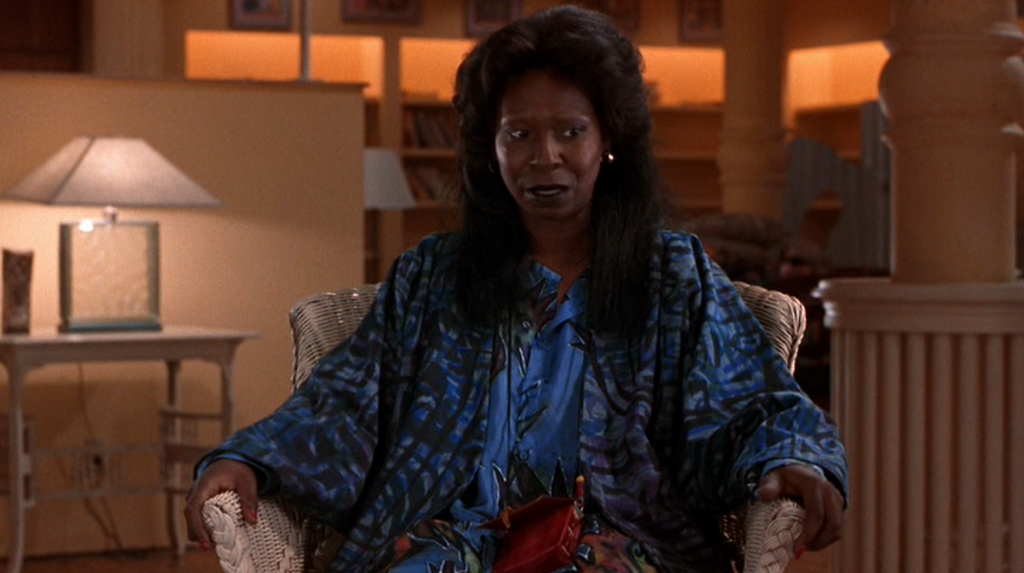 The difference between the two surrogations underscores how Zucker and Goldberg use the broad slapstick scenes to set up the beats of Oda Mae's character arc. Oda Mae's physical pain is the visually entertaining cue of the character's slow, painful transformation from a selfish two-bit hustler to a woman who finally appreciates her gift and the intangible rewards of doing the right thing. While the rest of the film's characters are absorbed in simple, sequential discoveries and revelations, Goldberg's Oda Mae gets to be the single character to grow and change, thus providing an essential, experiential anchor for the film's fantasy of a love everlasting. 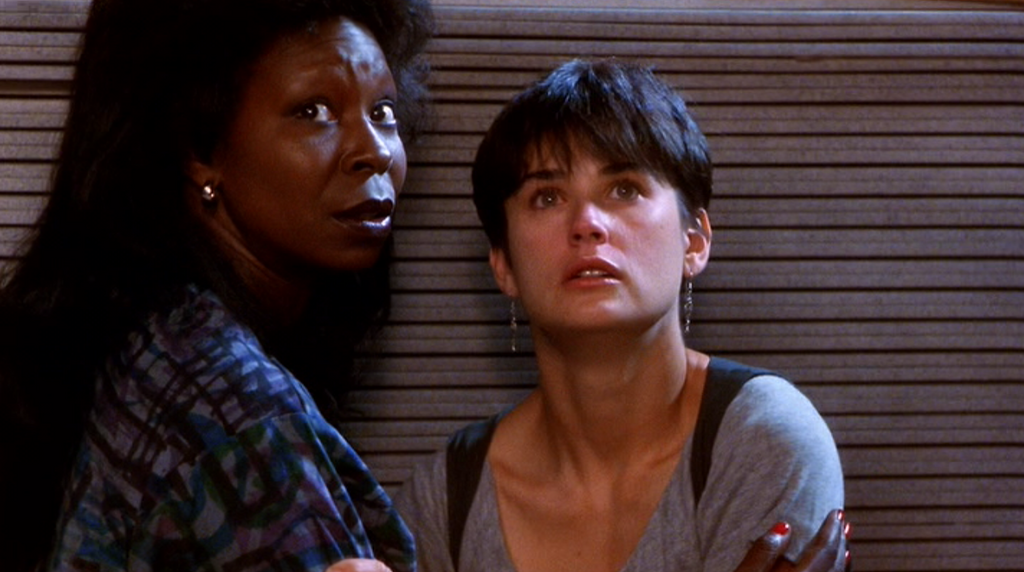 Goldberg's accomplishment in the role of Oda Mae is formidable. Not only does she maneuver every one of the film's discordant styles (fantasy, comedy, thriller) with aplomb, but she also does it with some pretty heavy baggage overlain by the film's production team. Goldberg's performance survives the ill-conceived, tone-deaf costuming which thoughtlessly jokes at Oda Mae's expense. Goldberg also transcends, in a very subtle homage to the genius of Mantan Moreland, the film's predisposition to old, racist comedy tropes of the "scared black people are funny" variety. Most substantially, Goldberg's Oda Mae emerges intact from the film's naive willingness to flip the slapstick from unreal to real, in a cheapening attempt to raise the stakes by making Oda Mae feel the force of actual violence.

It's the combination of Goldberg's preternatural charisma and formidable comedic gifts that redeems this role, creating solid work at the heart of the film. Yet, like so many slapstickers, Goldberg's Oda Mae is dismissed more often than she's appreciated. 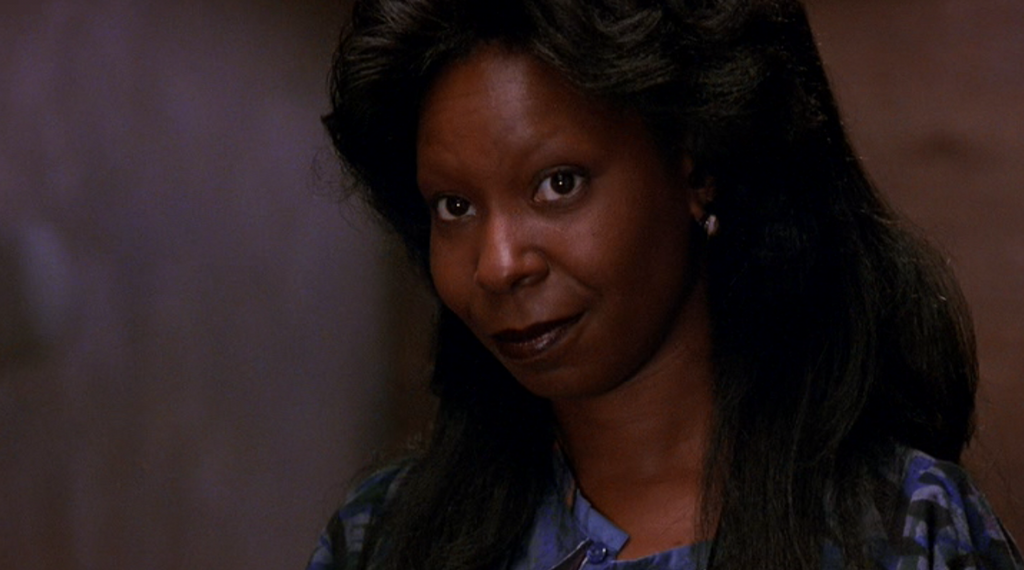 But, somehow, methinks that Goldberg'll be just fine. She did, after all, beat a "few" odds: a black woman in a comedy performance with slapstick overtones taking the Oscar? Slip on that banana peel, Hollywood...

After this movie aired on CBS, my mom taped it and I consisted to watch it about every week, usually fast-forwarding the first thirty minutes or so until Whoopi shows up. I was seven. Because of that, this is one of the performances that has a special place in my heart, yet I could never articulate why it was so wonderful. Your entry did it in spades.

I loved this post. It was a really unexpected entry for the slapstick blogathon, but it really worked. Goldberg's performance is indeed wonderful. It's such a schmaltzy film, but she makes it utterly watchable. Because she hasn't been in any decent movies for so long, it's sometimes easy to forget how talented she is.

I like how your piece helps us understand how Whoopi's uses the conventions of slapstick in her performance to guarantee laughs, especially how she does it without slipping overboard into silliness (though she can do that for laughs too in something like, say, Jumping Jack Flash (1986)). This slapsticky performance deserves the recognition it receives-both from the Academy and from fans of screen comedy like us.

Thank you for contributing an outstanding post to the blog-a-thon.

Love, love, love this performance! She was so brilliant in "Ghost" that I would consider suffering through the film again just to see her performance. I really wish someone would utilize her unique comedic talents again and give her a great role again (TV or movies, I don't care).

You're right, this a great performance by Whoopi. I like the way you described it as being slapstick without all the obvious marks. And thanks for the reference to Mantan Moreland. I was lucky to catch an interview with him on a San Francisco-area UHF show called "The Worst of Hollywood" in the early 1970s.

I never would have thought of this performance for the blogathon - which is what makes your choice so terrific. Way to go, Whoopie!

Sorry. I like Whoopi, but even in slapstick there's subtlety, and Goldberg's about as subtle as a ham hock. It's one of the more disgraceful winners of the last 20 years.

'Tis definitely a polarizing performance, Alfred. And I've been at both ends of the opinion spectrum on't. Will certainly be interesting to see how the Whoopster fares in this month's Smackdown...

Knowning who directed the film creates a queasy subtext: the creator of Airplane! and The Naked Gun must have been aware of the minstrelsy elements he insisted on getting from Whoopi; and since Zucker's incapable of irony, the performance is unwatchable (which is not entirely Whoopi's fault).

Indeed. But part of what made my pass through this performance more interesting than I expected is watching how Whoopi maneuvers the racist schtick. Her work is, at times, much more sophisticated than her surround. And, of course, throughout her career, Whoopi has been very forthright in her interest in certain "quease"-laden traditions of African American comedic performance. The traditions she's drawing from are, indeed, loaded with racist history. And I'm not saying she redeems them. I'm just saying there's more to her performance than might appear at (offended/appalled) first glance.

And Zucker's an easy target. The one thing, though, I will say for the man is that the reason Ghost works at all is that he does the "set up" so well. Each pay-off moment in the final act is preceded by a very specifically crafted "set up" scene. It's not the most sophisticated, but it is entirely effective.

I would agree that the (racially) worst elements of Whoopi's performance are the ones that have been most embraced (ie. included in clip reels, montages, etc). I'm talking about the 1st surrogation & "you in danger girl." I'm not entirely sure what to make of that, or whether the embedded racist pleasures of the role helped secure her win, but I do think Whoopi's willingness to "go there" points to the validity of both of our perspectives on this performance.

Before it got suspended, there was an excellent YouTube account that had a ton of Oscar awards clips, and "You in danger girl" was in fact what they showed for Whoopi's clip ... The line and delivery may be stereotypical, but in context they're also effective.

And something tells me this is gonna be a VERY interesting Smackdown!