The roster for July is in -- 1988 -- one of the few rosters of Supporting Actresses from which all the nominees, especially the newbies, survived to thrive in dynamic, interesting careers. Another something all of 1988's Supporting Actresses share? Each of their movies are, to greater and lesser degrees, about "class." Even more, the socioeconomic station of each Supporting Actress character instrumentally informs each plot. Of all four movies, though, Lawrence Kasdan's romantic drama The Accidental Tourist most reflects American culture's stubborn denial about the realities of social class in the United States. Kasdan's film relies on class differences to amplify the will-they-or-won't-they conflict that impels the film's narrative, even as the film depicts such differences obliquely, as mere decoration. This denial finds tidy embodiment in the performance of... 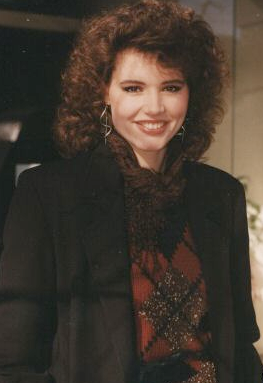 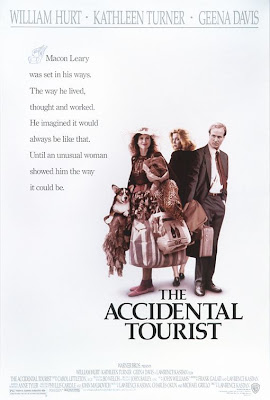 Geena Davis plays Muriel Pritchett, the woman whose zesty directness and startling fashion sense shake the emotional foundations of the film's protagonist Macon Leary (William Hurt), a grief-stunned man staggering through his life as it falls apart around him.

Davis's Muriel alights into Macon's life by happenstance (she works at a kennel; Macon needs a dogsitter) and it's "MINE!" on first sight, at least for Muriel. As scenes proceed, Muriel's glib tenacity in placing herself squarely in Macon's path creates the circumstances of -- in the best romcom tradition -- an entirely implausible (and thus life-altering) romance. Davis's Muriel chatters and cheers, Hurt's Macon winces and whines, and true love is found.

Most of Muriel's entrances are signaled by broad, non-sequitur pronouncements ("I bought this car for $200!) and Davis plays these proclamations to their hilt. Unfortunately, Davis's Muriel -- more often than not -- zings this way and that with such a wafty winsomeness that the whole project starts to stink of carefully contrived quirk. Indeed, by the time the two land "separately" in Paris, Davis's Muriel seems more like a ditzy glamazon of the Romy and Michelle variety than the uncultivated, somewhat dumpy force of nature that the narrative seems to require.

Davis's best scene is her quietest, where she says little and instead listens to Hurt's Macon describe the depths of his despair. Only in this scene, with little makeup and no "outfit," does Davis provide a hint of Muriel without the bells and whistles, a fleeting glance into Muriel's "bashful" side. Granted, this scene is the only one to script Muriel's quietness, but part of the challenge of actressing at the edges is crafting the bridges between the scripted moments. Muriel's complexity exists beneath and between her lines, and Davis's proclamatory approach to the character tends to race toward the next line reading and right past whatever's in the in-between.

Likewise, Davis's characterization does not address the not-so-subtle mercenary aspects of Muriel's attraction to Macon. Yes, she wants a man in her son's life. Yes, Macon needs what she has to give. But...does Muriel do this often? Does she stalk every man with a credit card who comes into her shop? Davis glibly skips over whatever shadows might be found in the character in order to make Muriel a radiant beacon of hope for Macon. The problem? This is almost more frightening. Muriel, at times, seems like the energizer bunny, a perpetually happy clown who only wants to turn Macon's frown upside down...or else.

This much is clear: Geena Davis memorably nailed certain aspects of this character -- the verve, the kookiness, the sweetness, the bravado -- but she crafts only a partially brilliant performance. By focusing so exclusively on Muriel's light (to the exclusion of her shadows), Davis's Muriel diminishes the character's dimension, her scale, her humanity...her true sparkle.

This is one of my favorite books. I could live without the movie.

I can't wait to see your Cusack analysis. What an absurd nomination...

Thanks for the comment on mine Lulu. What can you do with then fanatics.

Looking forward to seeing who wins this one. I can see it being a fight between Michelle and Sigourney, two long over due actresses.

I like this blog is fantastic, is really good written. Congratulation. Do you want to see something more? Read it...:Great investment opportunity in Costa Rica: beach real estate, condo, condos for sale. Visit us for more info at: http://www.costa-ricarealestate.com