For Your Consideration: Seema Biswas in WATER (2006 Supporting Actress Contender)

2006 is nearly halfway gone. And, while StinkyLulu has admittedly not been the most diligent filmgoer this year, few performances have really asserted themselves as contenders, especially in the only category that matters: Supporting Actress. (Frances McDormand in Friends with Money notwithstanding. See, in the '00s, Franny's on the verge of becoming like Joan Allen in the '90s or Thelma Ritter in the '50s -- when in doubt, toss a nom.)

See, yesterday, fresh from the 1942 Smackdown, MrStinky & Lulu ventured to the cinema -- where "lo & behold" StinkyLulu spied the first supporting performance of the year to cause Lu to sit up & say: "Now, there's a Supporting Actress who deserves to be remembered come nomination season!": 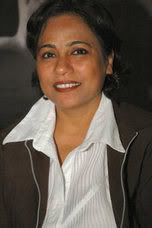 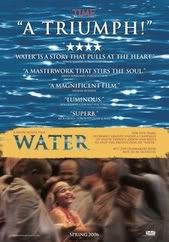 (Yeah yeah, the film's dated '05 but its official US release is '06. And even though Dismas was nominated for Best Actress in Canada's Genies -- StinkyLulu's convinced it's a perfectly Supporting performance.)
Deepa Mehta's Water (the 3rd in her "elemental trilogy") is an imperfect treasure -- a haltingly plotted romantic tragedy with a shockingly dramatic premise & at least one transcendant performance. See, it's India in 1939. Ghandi's still imprisoned for speaking out against British colonial rule. And widows, in accordance with a mandate from 2000 year old holy texts, are sequestered in ashrams, living lives of scorn, humiliation and self-abnegation until they join their dead husbands (of whom they are believed to be a component part) in death. Against the historical backdrop of India's liberation from British colonial rule, the film contemplates these widows whose lives yet inhabit the intransigent injustice of religious tradition.

The story follows the arrival of two characters unfettered by the religious traditions that bind these widows: Chuyia (a recently widowed child bride who now must live her entire life in the widow's ashram) and Narayana (scion of a Brahmin family living adjacent to the widow's ashram & idealistic follower of Ghandi). These two become unlikely collaborators in resisting the traditions of the ashram -- instigating all kinds of spiritual, emotional and social havoc -- as both become devoted to the beautiful widow Kalyani (and as Kalyani & Naranaya discover love).

Within this narrative of exultant/doomed romance, however, it is Seema Biswas as Shakuntala who grounds the narrative in emotional substance. Educated, kind & deeply religious, Biswas' Shakuntala is as a spiritual guide for the widows, quietly helping them to find spiritual peace within their religious plight. Yet as injustice & tragedy beset the widows' ashram, Shakuntala's crisis of faith becomes a crisis of conscience and -- in a series of nearly wordless scenes of heartrending intensity -- Biswas' Shakuntala liberates Chuyia from the widows' ashram and delivers her to Narayana (and to a new life in Ghandi's India).

Biswas' performance is electrifying: profound, poignant, precise. Hers is a performance of little bits -- ritual gestures, quiet words, alert glances -- that clarify Shakuntala's integrity and spiritual fortitude. We know next to nothing about this woman (her history, her caste, her family) but, through every moment, we come to know Shakuntala. And Biswas' work here elevates a sometimes clumsy film. It's a remarkable, redemptive performance. And worth consideration come nomination season...

So, lovely reader, here begins yet another feature of StinkyLulu's Supporting Actress obsession. Basically, Lu's agonna start accumulating a list of worthy Supporting Actress nominees from this year's releases. (There'll prolly be a special pre-Oscar nomination Smackdown on the subject in January.) So, do tell StinkyLulu -- in comments or via email -- anytime you see a Supporting Actress performance that deserves attention. Films of all pedigrees (indy, trashy, arty) are welcome. Sometimes Lulu just needs that extra kick in the pants to make it to the googaplex...

Biswas is certainly leading the pack among supporting actresses in the movies I've seen this year (and I agree with you that she isn't a lead). Every word you spoke is true, about both the performance and the movie it helps to save.

You might also want to check out Charlotte Rampling in Lemming if you get the chance. So far, these two are all I've really got.

This comes out here (in Sri Lanka) next month... very excited- it was shot here and I was lucky enough to go for the wrap party

I agree- great performance. I thought the little girl was wonderful, too.