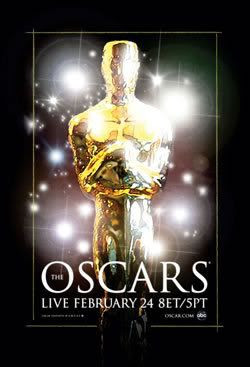 And Kathy Bates says the 2007 nominees for Best Supporting Actress are...

SUPER QUICK ANALYSIS: The four nominations have been fairly secure for months now (Blanchett, Ronan, Ryan, and Swinton), leaving only one nomination slot "open". I had expected that slot to go to a "coaster" -- a Supporting Actress who slides into the nomination because of the general abundance of nominations for a particular film. It had seemed that Catherine Keener might benefit from such "coasting" but the apparent disaffection for Into the Wild among Academy voters left her out. The "alternate coaster" -- Jennifer Garner in Juno -- also didn't sneak through which is also almost a surprise. Ruby Dee's nomination, however, is a pleasure, if only for acclaim it retroactively affords her extraordinary career. And with her trouping compatriot Hal Holbrook over in Supporting Actor, a nomination for an elder in the Supporting category becomes a way to toss some token of appreciation to a widely respected, if not widely loved, film. Which, if anything, is the story from this year's crop of Supporting Actress nominees...

AND ANOTHER THING: I'm a bit disappointed, though, that Blanchett got double-nommed. Not uncommonly, and reaching all the way back at least to Teresa Wright in 1942, a nomination in Best Actress tips the odds toward the double-nominee's winning in Best Supporting. (The recent exception being, of course, Julianne Moore in 2002, who won neither; the argument there, though, was that her pair of 50s housewives diminished the impression of versatile accomplishment rather than underscoring it.) The sheer feat of Blanchett's cross-gender inhabitation/impersonation of Dylan has fortified her as the frontrunner for what seems like forever. Now, the double-nom seems to clinch it. All of which makes it two years in a row where my favorite category feels like a foregone conclusion...

AND ON ANOTHER FRONT: I'm so pleased at how many women got nominated in writing categories (3 of the 5 original screenplay noms and 1 nom in adapted, with -- arguably -- Marjane Satrapi's authorship of Persepolis being acknowledged as well in the animated noms).

Posted by StinkyLulu at 8:39 AM

At last, another supporting actress smackdown I can participate in. :)

Are you saying that Marjane Satrapi is arguably a woman?!

i changed it. (but, for the record, what JD's teasing me about is the following turn of phrase: "AND ON ANOTHER FRONT: I'm so pleased at how many women got nominated in writing categories (3 of the 5 original screenplay noms, 1 adapted, and arguably Marjane Satrapi in animated).")

That JD. Such a silly.

I'm still pulling for Tilda, though it seems to me, aside from the double nom, that SA is the least sure category this year. It seems to me that Day-Lewis, Bardem and Christie are locks for their awards (with a possible Cotillard spoiler)

Sigourney Weaver was also a double nominee for Working Girl and Gorilas in the Mist and, sadly, she didn't win either.

I think Cate Blanchett is going to win Supporting Actress due to both the double nominations and the fact that she's clearly hugely respected. There's not a lot of people they'd give nominations to for playing the same role twice, but worse the second time.

And, last year, a nomination which got in pretty much by being in the same movie as one of the most respected actresses of our time and simply being over-emotive window dressing.

If she doesn't win; it's going to be indicative of over-exposure and little else.