As you may or may not know, StinkyLulu's undertaken a newish project:

Supporting Actress Sundays is project for the long haul. Each Sunday for a month of Sundays, StinkyLulu (re)screens all and offers an extended commentary on the nominees (plus some of those snubbed) from a given year's roster of Oscar hopefuls (the year is selected by StinkyLulu's lovely readers). Toward the end of that month, StinkyLulu joins with fellow movie obsessives to create a virtual roundtable -- or Supporting Actress Smackdown -- for the year in question.

For this first Smackdown, StinkyLulu's tickled, thrilled and privileged to be joined by the prodigiously productive Nick of Nick's Flick Picks AND the indefagitably industriousNathaniel of The Film Experience.

The Year is 1958...
But oh! -- Lovely reader, if you haven't already, you simply must jaunt over to Nathaniel's for the marvelous clipreel of 1958's Supporting Performances. Nathaniel constructed this glorious montage expressly for our edification and exhilaration. Pause to be in awe.
(Quick aside about format: Because Lulu's all about Love, the Smackdowners comments are listed according to ascending love levels. Summary thoughts from the Smackdowners are at the end. Click the nominee's name/film for StinkyLulu's Supporting Actress Sunday review; the Stapleton review'll be published next Sunday.) 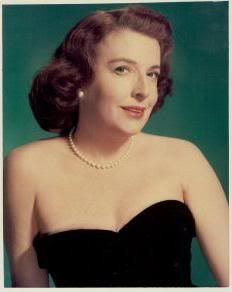 Nick Sez Y
"A close facsimile of the kind of farcical stock figure that probably worked better on stage. She hunkers in, shrills her lines high and loud, cleans up semi-prettily, and basically disappears. Fine as these things go—but an Oscar nomination?"
StinkyLulu Sez YYY
"Does it up and does it well. Sweet and silly, the full-out farce is strange to review in an Oscar field but Cass does what she does exceedingly well. Plus, that voice! Simply can't think of the movie without hearing it."
Nathaniel Sez YYY
"Possibly too big a turn but you have to pitch to the rafters if you're trying to keep up with rat-a-tat-tat Roz' (not an easy task in any film). Bonus points: I share "Gooch"'s unquenchable thirst for Dr. Pepper." 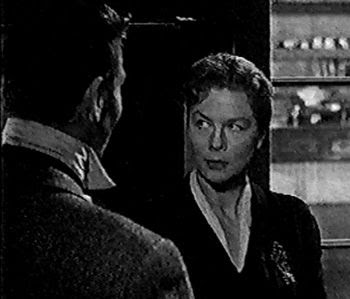 Nick Sez YY
"I like it when voters gravitate toward unsensational performers, doing journeyman work with largely functional roles. Still, I don't think Hiller plumbs that deeply here, and I don't buy her with Lancaster at all. Intriguing, but too severe."
Nathaniel Sez YYYYY
"Given the usual confines of the mature businesswoman role, I found her physicality and rich voice a sensual surprise. Whether continually in motion or silent and still with her back to the camera, you can always 'read' the emotions."
StinkyLulu Sez YYYYY
"Perhaps it's the simplicity of surprise, but this performance caught Lulu totally off-guard & -- now, weeks later -- still has Lulu pondering its workings. Hiller offers an uncommonly textured performance of a role that, in different hands, would likely have been a simple serviceable performance of a serviceworker role."

Martha Hyer in Some Came Running. 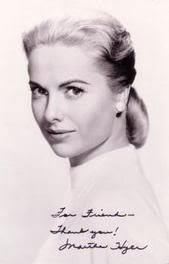 Nathaniel Sez Y
"Generally speaking the thaw of the ice queen is my favorite of character arcs. So when someone plays a frosty uptight woman who melts for love and manages to bore me to tears, they're doing something wrong. Wooden and unsatisfying."
StinkyLulu Sez YY
"Hyer gets a little bit of Lulu's love for the chops she showed opposite Shirley in that not quite last scene. But otherwise? Big puddle of boring."
Nick Sez YYY
"This film rarely affords its cast the heady, expressive leeway that we feel in the music and the images, so Hyer occasionally gets stuck as The Girl. But in scenes like her schoolroom confidential with MacLaine, she shows real muscle." 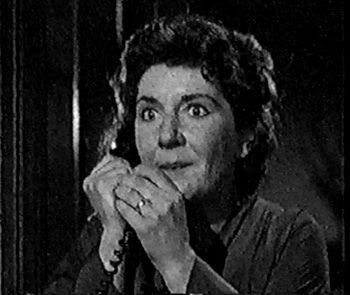 Nick Sez YY
"The most offbeat film in the bunch, but not the most interesting performance. Stapleton convinces us that she's turned on by Monty Clift, but surely there are bigger challenges? Not a rich enough part to warrant a nod."
Nathaniel Sez YYY
"It's certainly forceful acting. But I had more questions about the character than answers. Each scene was beautifully played but the performance didn't seem cohesive causing me to imagine that they'd cut a key scene."
StinkyLulu Sez YYYY
"Vulnerable, vicious, voracious... Stapleton's concentrated jolt of a performance is strange but thrilling, a surprising prototype for all Hollywood's Fatal Attractions yet to come. Too bad she had to do most of her work opposite that big-head-on-a-wood-stick, Montgomery Clift."

Cara Williams in The Defiant Ones. 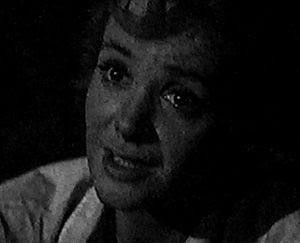 StinkyLulu Sez Y
"It's an expert journeyman performance in a throwaway cliche of a role. But Lulu can't help but feel it's a performance that any remotely competent actress could have given."
Nick Sez YYYY
"Stanley Kramer, all too typically, keeps forcing theses and emblems of American race relations down our throats, so Williams' subtly and slowly revealed racism offers terrific counterpoint. The only nominee with real mystery."
Nathaniel Sez YYYY
"She may overplay the sexuality of her role as "the woman", but what's note-worthy is the dead accurate portrayal of casual racism, full of shrugging 'I just don't know any better' rationalization and self-serving ignorance"

So, by a Y the Smackdown agrees with Oscar?!?!?!
(Who'da thunk't.)
And now some "Final Thoughts" from our inveterate SMACKDOWNERS:

StinkyLulu Sez: "Viewing these performances as a field, it's striking that these ladies are all teetering on some kind of sexual precipice. Peggy and Martha didn't even know they wanted it; Maureen and Cara have been waiting for it way too long; and Wendy's worried she'll never get it again. It's a curiously continuous horniness -- almost like Oscar had "erotic frustration" as an extra, secret, unannounced criterion in selecting nominees. And perhaps that's the explanation for the absence of certain other 1958 Supporting Actress nominations that would have certainly complicated the field. (Most notably, for Lulu at least, Madeleine Sherwood as "SisterWoman" Mae Pollitt in Cat On A Hot Tin Roof.) Fascinating though to consider. Are there any other "theme" years in terms of acting nominations?"

Nick Sez: "When I remember The Defiant Ones, Williams is immediately part of the memory, which I can't say of her fellow nominees. You walk into her cabin expecting Dita Parlo in Grand Illusion, but by sexing up the atmosphere so fast and then souring it with her bigoted ignorance, she complicates our perceptions more than anything else in the movie. By contrast, Peggy Cass and Martha Hyer are outshone in their own films by Coral Browne and Leora Dana. To be fair, the Best Actor and Best Supporting Actor fields weren't any richer, and I am always glad to be exposed to some new faces, or to some interesting early work by future fixtures like Hiller and Stapleton. But on the whole? Meh. Chili-cooking, tarot-reading Marlene Dietrich in Touch of Evil: now that's some kind of an actress. Even Mercedes McCambridge in the same movie does more with one butch haircut and four short words ("I want to watch!") than all these five gals combined."

Nathaniel Sez: "Prior to these screenings I had only seen Auntie Mame. So apart from Peggy Cass and Maureen Stapleton, I was unfamiliar with the actressesnominated. Having no idea who Wendy Hiller was, I assumed that the nominated and winning lady from Separate Tables was the hilariously bitchy senior citizen (Gladys Cooper, herself a three time Supporting Actress nominee) who terrorizes the other tenants with her judgments. You know this woman: She's the kind that Maggie Smith can portray (and get nominated for) in her sleep. So I was pleasantly surprised to find that the performance that was actually nominated and went on to win was the one that I myself was most drawn to. That's a rare treat, when Oscar and I meet and find common ground."

So, lovely readers, do you "meet and find common ground" with the Smackdowners for 1958? If so, if no -- please do continue the Smackdown in comments. And if you would like to join the fun/insanity/obsessiveness of a future smack down, just email StinkyLulu... The next Smackdown should be May 28 for a Year of Nominees yet to be determined.

Oh, to be forever stuck in the minority!. "It's good to be out of touch" sounded so snappy and right when George Clooney said it, but at present, it just feels lonely!

I hope Martha Hyer's spirit is off somewhere 'preciating me. (Thanks, Stinky, for throwing such a fun party.)

Felt for ya there, Nick.
Surprised me too.
But hey: we all have moments where' we're outstanding in our field. All alone, out there, standing, all alone...

Thanks for your "hot dish" at this here movie potluck. Upped the ante.

Now, of course, I'm afeared that the exercise will be amusing only to you, Nat & me... So maybe we're out here all alone together after all...

Well, IMDb implies that Martha Hyer and Cara Williams (aka Bernice Kamiat) are both still alive... so you've gotta think this is more action than they've seen in a while. Someone, plug in their ethernets!

And now back to my wintry outpost in Supporting Actress Siberia... Separate tables, indeed.

I'm here! I've enjoyed this hugely despite not having seen a single one of the nominated perfs. From Nat's showreel alone I can tell that Peggy Cass would not have been my bag, and Hiller seems weirdly dykey in her part -- is this the idea? To Nick's list of the handful of American masterpieces made that year I'd have to add Man of the West, in which Julie London is really quite creditable and would get on my list. Also, what's wrong with Barbara Bel Geddes in Vertigo? She's sweet and sure-footed, and perfect for that admittedly limited role.

Well I loved this as well. I haven't seen a single one of the nominees, but now I'm definitely interested. Keep up the great work!

Of the 5 I've only seen Wendy Hiller but that was still a fun read.

By the way, Hiller's performance here is closer to her late work than early work. Everybody should check her out as the definitive Eliza Doolittle in "Pygmalion" (1938) and as an unusually complex female (when it comes to movies of the period) in Powell and Pressburger's "I Know Where I'm Going!" (1945). Lovely films both.

I'd say try for Thelma Ritter in something. I think this is more exciting than the Best Actress List. And I love the consecutive noms. What about doing an early, early year? Like the first year of Oscar--could you even get all the pics?